END_OF_DOCUMENT_TOKEN_TO_BE_REPLACED

His is a familiar name on the Creighton University campus, perhaps to students of the University’s history, perhaps to those who have visited the building that bears his name.

But beyond the bounds of the Creighton campus, the Rev. John P. Markoe, SJ — namesake of Markoe Hall — is perhaps less well-known. Even so, his legacy — one of tireless struggle to advance civil rights and racial justice — is one we live with and learn from every day. 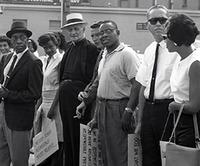 As the University continues its work to become an anti-racist institution, we remember the life of Fr. Markoe, a former Creighton mathematics professor and steadfast civil rights advocate. All his life, Fr. Markoe railed against the structural racism that pervaded American life throughout the first half of the 20th century and still persists today.

Leading a group of courageous Creighton students and community allies known as the De Porres Club, Fr. Markoe and his students challenged the racist attitudes and practices of the Omaha community. They staged sit-ins at restaurants that refused to serve Black people. They boycotted public transportation for discriminatory practices. They launched pressure campaigns against local business that refused to hire employees based on race.

Their work paved the way for the broader civil rights movement of the 1960s and continues to inspire many today.

Born to a Minnesota family in 1890, Fr. Markoe’s early life is a story all its own. He spent time working for the railroads, first in Minnesota and then west through the Rocky Mountains, before eventually entering West Point Academy, where he won honorable mention as an All-American football player.

At the academy, his classmates would include future President Dwight D. Eisenhower, with whom Fr. Markoe maintained correspondence for much of his life.

According to From Corps to CORE, a biography of Fr. Markoe written by Creighton alumnus Jeffrey Smith, MA’67, it was at West Point that the young Fr. Markoe began to demonstrate his fierce commitment to racial justice.

During a drill, Fr. Markoe overheard a classmate speak disparagingly about West Point’s only African American cadet, Marcus Alexander. Fr. Markoe flew into a rage, physically attacking the student who had used a slur to refer to Alexander, until he had to be pulled off by his fellow cadets.

After graduation, Fr. Markoe served in the U.S. Army in a Black regiment assigned with patrolling the U.S.-Mexico border. But early struggles with alcohol would eventually result in his discharge from the military until he later rejoined, enlisting in the Minnesota National Guard.

Fr. Markoe returned to the Mexico border eventually earning the rank of captain. (He would be known as “Cap” to friends for the rest of his life.) After his discharge from the Army in 1917, Fr. Markoe, like his brother Bill before him, joined the Jesuit order. 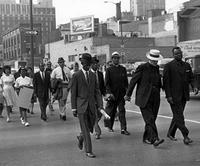 Together, the brothers signed a private pledge to “give and dedicate our whole lives and all our energies” to “the Negroes in the United States.”

While working in St. Louis, Fr. Markoe advocated strongly for integration in the Catholic Church, which at the time relegated many Black Catholics to separate parishes and denied them access to parochial schools. He wrote articles speaking out against racial segregation, declaring it a moral issue and earning him the ire of many of his fellow priests and members of the Catholic community.

In the 1940s, Fr. Markoe and his brother began working with others to desegregate St. Louis University. Their efforts were successful; the university was integrated in the fall of 1944. Two years later, all Catholic schools in the diocese were opened to Black students.

Following their work to integrate the university, Fr. Markoe and some of his fellow Jesuits were reassigned (or rather “exiled” in the words of Bob Reilly, ARTS’45, former public relations director at Creighton who profiled Fr. Markoe in the 1990s) to Omaha.

Kicking Jim Crow Out of Omaha 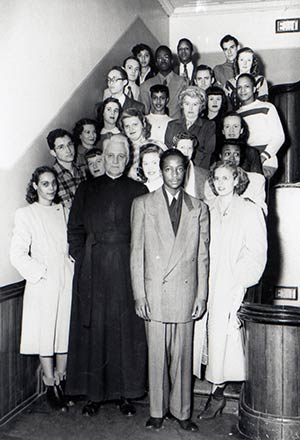 Fr. Markoe arrived at Creighton in 1946. He soon heard from student Denny Holland, BS’49, who approached the priest asking about what could be done to address the racial injustices he saw every day.

Within the year, an interracial group of local students and activists had begun meeting on the Creighton campus. They called themselves the De Porres Club, named after St. Martin de Porres of Peru, the patron saint of racial harmony. The group’s first meeting attracted a crowd of 47 people, according to Nebraska History Magazine, the magazine of the state historical society. Holland was elected club president.

Fr. Markoe told the crowd that the club’s stated goals were “better racial relations through constructive actions, to banish every form of compulsory segregation and abolish any and all forms of discrimination against individuals because of race, color or creed.”

In practice, Fr. Markoe continued bluntly, that meant the club would “kick Jim Crow’s ass out of Omaha.”

The group met weekly on Mondays from 7 to 10 p.m. Though the club initially met on the Creighton campus, administrators deemed its activities too controversial, and the group was asked to meet elsewhere. From then on, they met at several places around North Omaha, including the offices of the Omaha Star, owned by Mildred Brown.

“I thought we might just be a prayer group,” Holland later said. “We met, discussed articles on racial justice, had speakers. One night, Fr. Markoe suggested we adjourn and go en masse, Black and white members, to a local restaurant that refused to serve Blacks. I was nervous about it, but I went.”

From then on, the De Porres Club engaged in a series of public actions that a directly challenged the racial injustices of the city.

When neighbors harassed a Black couple for moving into a white neighborhood, club members stood watch, protecting the home.

In one notable case, the group targeted a Coca Cola plant located in North Omaha. The plant was refusing to hire Black drivers, claiming it was “not good business to employ Negroes in positions where they would come in frequent contact with the public.”

The club wrote letters to ministers in the area asking them to preach against the policy. Members contacted Coca Cola customers and informed them of the plant’s discrimination. Finally, they picketed. Caving to the negative publicity, the company eventually began accepting Black applicants.

The group also brought to task the Omaha and Council Bluffs Street Railway Company, which oversaw buses and streetcars across the metro area. Like the Coke plant, the street railway company refused to hire Black bus drivers.

Years before the Montgomery Bus Boycott in Alabama, the De Porres Club staged rallies and wrote missives to Omaha residents, asking them to refuse to ride the bus. To those who did ride, the club asked them to pay their 18-cent fare in pennies. Mildred Brown appeared before the city council, saying, “If our boys can drive jeeps, tanks and jet planes in Korea, in the fight to save democracy, make democracy work in Omaha.”

Through at all, Fr. Markoe acted as a steady hand, providing leadership and reassurance to club members, who often faced criticism from friends, family and neighbors. Some De Porres Club members were even barred from attending certain churches. Mail came into club headquarters re-sealed. Some members recalled being followed by police officers late at night.

Before he died in 1967, Fr. Markoe was honored at a special dinner on the Creighton campus. There, Archbishop Gerald Bergan publicly apologized for not being more supportive of the work of Fr. Markoe and the club. “He was right,” Fr. Bergan said. “And your archbishop was wrong.”

It was Fr. Markoe’s unshakeable commitment to justice, one club member recalled years later, that gave them the courage to continue the important work: “His utter conviction that fighting for civil rights was what we should all be doing kept us going.”