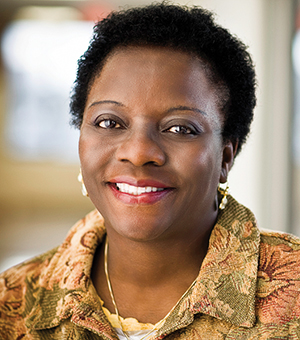 Multiple national award winner, Dr. Kosoko-Lasaki, is an internationally renowned researcher in minority health with a focus on increasing the health care workforce. She has led Creighton University's participation in the training and education of a diverse group of faculty and students in the pre-collegiate and collegiate levels in Nebraska which has resulted in the award of several multi-million dollar award research initiatives. In addition, her efforts have also helped in the designation of the School of Medicine as a Center of Excellence in Minority education in 2005.
Dr. Kosoko-Lasaki leads the office of Health Sciences' Multicultural and Community Affairs, with programs like the Pre medical, Pre Dental and Pre Pharmacy and Health Professions Post Baccalaureate Programs, the Health Professions Pipeline Program, Cultural Proficiency Seminars and Health Disparities Initiatives with a focus on Community Based Participatory Research. Dr. Kosoko-Lasaki has built collaborative relationships locally, nationally and worldwide while serving as a community/academic leader in the Omaha area. She also oversees the recruitment of disadvantaged students to the health sciences, and mentors these students to retain them. Dr. Kosoko-Lasaki has lectured nationally and internationally on cultural proficiency and health disparity issues, focusing on the promotion of "pipeline programs" that prepare and support disadvantaged students from grade 4 through health professional schools so they can become successful health care providers.
As an ophthalmologist with a public health degree, Dr. Kosoko-Lasaki is passionate about training and educating individuals in developing countries on blindness prevention, specifically Vitamin A deficiency, the leading cause of preventable blindness in children and a major public health problem throughout the world and glaucoma. She has served as a consultant to UNICEF, USAID and Helen Keller International in Burkina Faso, Niger, Mauritania, Chad and the Philippines. Since 1986, Dr. Kosoko-Lasaki has researched the prevalence of glaucoma in Blacks in St. Lucia, West Indies. With a focus on detecting and treating glaucoma--the most common cause of blindness in African-Americans and Hispanics--she has initiated health fairs and screenings through Washington D.C. metropolitan area, in Nebraska, Iowa, Kansas, the US Virgin Islands and the Dominican Republic. She created a program for blindness prevention entitled, "Preventing Glaucoma Blindness in Nebraska: A Creighton University Initiative," targeting individuals at risk for glaucoma blindness in surrounding areas.
Dr. Kosoko-Lasaki has co-authored Maintaining the Target Intraocular Pressure: African American Glaucoma Specialist and Cultural Proficiency in Addressing Health Disparities.