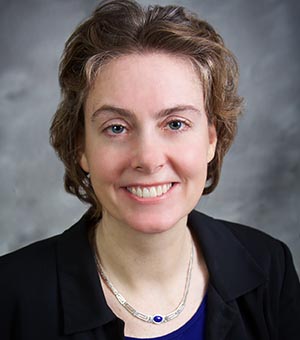 Dr. Burnett is an Assistant Professor of Neurology at Creighton University School of Medicine in Omaha, Nebraska.   She is a movement disorders specialist, seeing patients with Parkinson’s disease, tremor, difficulty walking, ataxia, and other conditions that affect movement.  She also serves as Neurology Clerkship Director for the Creighton School of Medicine.

Dr. Burnett graduated from the University of California, San Francisco, School of Medicine.  During medical school, she spent an additional year completing a Doris Duke Clinical Research Fellowship.  She then did her medical internship and neurology residency at the Mayo Clinic in Rochester, MN, where she served as chief resident.  After a movement disorders fellowship at Mayo, she did a movement disorders research fellowship at the Royal Brisbane & Women’s Hospital in Brisbane, Australia.  After training, she worked at the Mayo Clinic in Rochester and in the Mayo Clinic Health System in southern Minnesota before moving to Omaha and joining the Immanuel Neurological Institute in December 2017.

Dr. Burnett is board-certified by the American Board of Psychiatry & Neurology and a member of the American Academy of Neurology, the International Parkinson and Movement Disorders Society, the Association of University Professors of Neurology, and the American Neurological Association.  She has published research papers on Parkinson’s disease and other movement disorders and is the recipient of a Melvin Yahr Early Career Award in Movement Disorders Research as well as the Creighton Medical School Golden Apple Award for Excellence in Teaching in 2019.