Partners throughout Creighton host lectures, invite speakers, and record podcasts. We invite you to view and listen to some of our exciting recordings below!

We're the Ones We've Been Waiting For: Power, Social Movements, and Lessons, April 1, 2019, featuring Hardy Merriman

Hardy Merriman is the President of the International Center on Nonviolent Conflict (ICNC) and an internationally recognized expert in civil resistance and how people power can overcome corrupt political systems and regimes. His lecture is part of the Planetary Emergency Lecture Series, which is funded by the 2016 Creighton Global Initiative.

Dr. Christopher Wright is Professor of Organisational Studies at the University of Sydney Business School where he teaches and researches organizational change, management innovation, sustainability and critical understandings of capitalism and political economy. His current research explores organizational and societal responses to climate change. 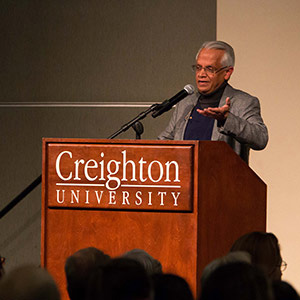 V. Ramanathan is a world renowned and pioneering figure in the history of climate science. He was appointed by Saint John Paul II to the Pontifical Academy of Sciences in 2004, advised Pope Francis on his ecological encyclical Laudato Si', and represented the Holy See at the United Nations Climate Negotiations in 2015 and 2016. His lecture is part of the Planetary Emergency Lecture Series, which is funded by the 2016 Creighton Global Initiative. It is advised to arrive early because there could be a large crowd.

A Conversation on the Planetary Emergency, 2012

Recorded with Dr. Richard Miller in 2012 (three years before Laudato Si'), the conversation addresses how one should consider the Planetary Emergency. The podcast also includes conversations about Creighton's efforts to mitigate environmental impact at that time.