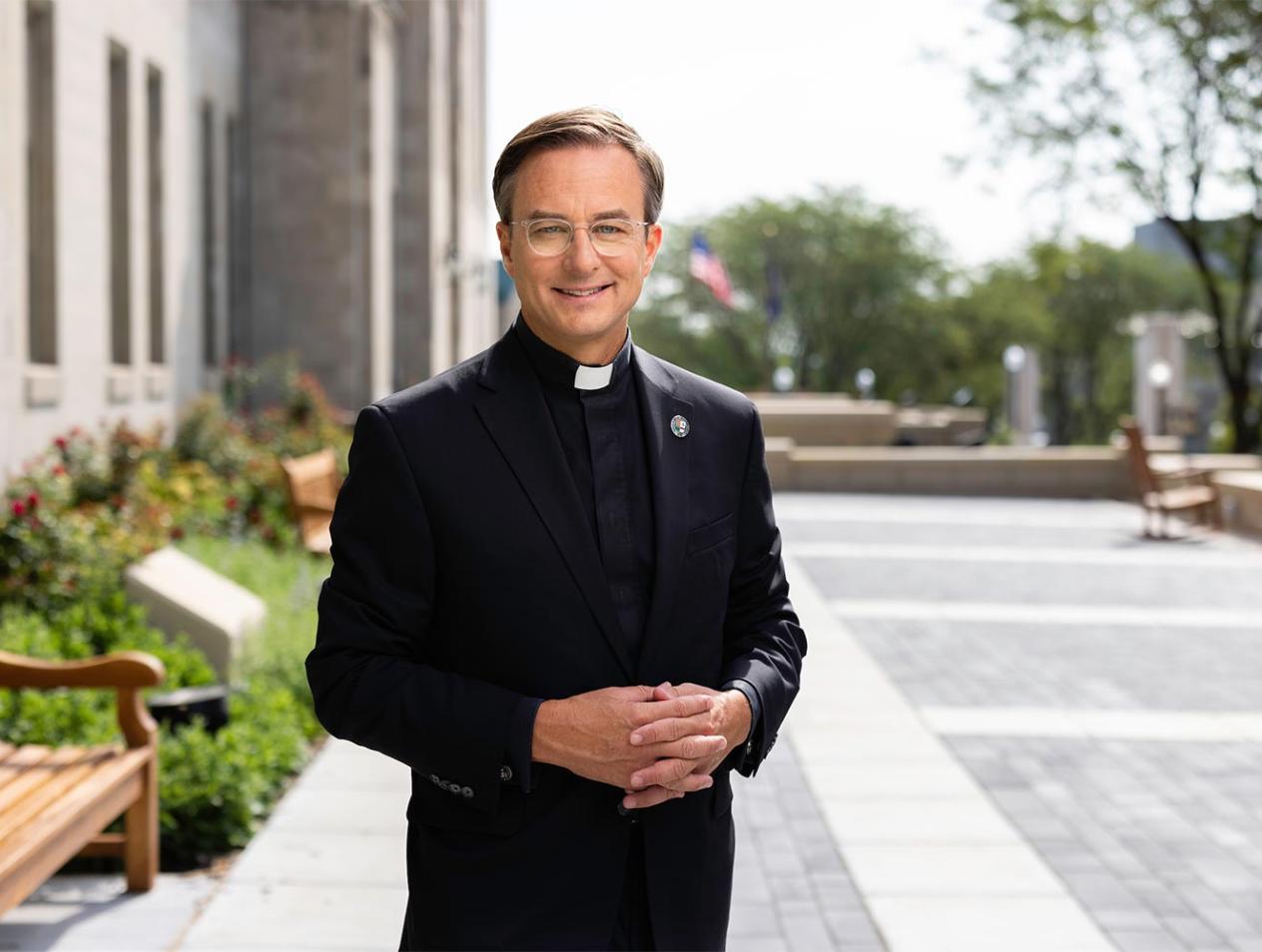 Today we mourn the loss of an icon and a person who in no small measure was a philanthropic hero for Omaha, for Creighton, and a model for compassion. On Saturday, we lost Walter Scott Jr., a man of humbleness and humanity, whose fierce belief in the care for his community, and commitment to give generously, cheerfully, and without trumpets, will forever remain his legacy.

I count myself as just one of many who called Walter a friend, as did several of my presidential predecessors at Creighton. We were all beneficiaries of his wise counsel during his over two decades of University leadership as both a member and chair of our Board of Trustees, as well as throughout his ongoing commitment as an emeritus trustee.

It was just recently that I was fortunate enough to have lunch with Walter. At 90, his passion for mission and goodwill was as evident as ever, as was his warmth and wit. We talked about his latest engagement with Creighton and some of my upcoming plans, and we enjoyed the company of Creighton students who were thrilled to be in his presence.

As Creighton University moves significant projects forward — from aspirations to impacting lives — we must credit Walter for his role in raising our sights. An important reason Creighton stands as one of the finest faith-based universities in the nation today is due to what I consider the “Scott-Morrison era.” Walter Scott, as chair, and the Rev. Michael G. Morrison, SJ, as Creighton’s president, prepared us for phenomenal growth, particularly in the area of academic reputation. During this era, we achieved 16 consecutive years as the top university in the Midwest, according to U.S. News & World Report. Today, we rank in the top third in the prestigious National Universities category.

Walter, and his philanthropic partner and wife, Suzanne, who preceded him in death, advocated for and contributed to the construction of a new science facility, the Hixson-Lied Science Building. It helped provide the impetus for our recognition as one of the nation’s top institutions for undergraduate opportunities for research, and set us on the path to becoming what we are today, the largest Catholic health professions educator in the U.S.

The Scotts asked that their investment in our Willing to Lead Campaign be used to name Morrison Soccer Stadium for their friend, Fr. Morrison. As the anchor for an eventual athletics corridor, Morrison Stadium elevated the Bluejays’ reputation for quality athletic facilities, culminating in an invitation to join the BIG EAST Conference.

Walter’s leadership of Heritage Services, a board composed of Omaha’s leading philanthropists, again proved a game-changer for the Bluejays when the Heritage-backed arena and convention center opened. Today, our men’s basketball team fills the CHI Health Center Arena, and we rank fifth nationally among teams with the highest attendance.

Also benefiting from Walter’s investments and shared belief was our new School of Dentistry – a destination that together we saw as a place for people who otherwise might forego dental care – and the Heider College of Business.

Through the Scott Scholars and Fellows scholarship program, one of the most generous offered in the nation, Walter also continues to help us recruit high-potential students to campus and to Omaha. I know with certainty that his presence in many of those students’ lives, and the conversations they have had with him, will remain pivotal to their future success. Many students named Scott Scholars and Fellows remain in Omaha after graduation, helping to contribute positively to the city and state where Walter was born and where he spent most of his life.

Both in business and at Creighton, Walter filled the great shoes of his executive predecessor, Peter Kiewit. Creighton has had the honor of including successive Kiewit executives as members of our Board of Trustees and mentors to our students. Of the six occasions that the University presented the Manresa Medal, twice it was awarded to individuals associated with Kiewit – Peter Kiewit and Suzanne and Walter Scott. Kiewit’s new headquarters, at the east edge of our campus, adds to this long association.

In 2011, Walter served as keynote speaker for the Business Ethics Alliance on our campus. It was in those remarks that he concluded poignantly that the Midwest and its people are recognized for integrity. “And,” he said, “that’s one of the reasons this is such a great place to locate our businesses.”

Of this there is no mistake – Walter and Suzanne Scott loved and believed in their community, enough that they gave everything back to it. And Creighton University will forever be blessed by that singular commitment. May God bless them both.