"To remember this history is not for the sake of keeping alive the memories of old tyrannies, but to recognize present tyranny, for these patterns are in us still.” — Doris Lessing

“It’s vital that we keep these voices heard and keep their stories going,” says Michael Staenberg, a St. Louis businessman and philanthropist born and raised in Omaha. “These times especially show us that we need to have respect for people, that we need to recognize that the color of a person’s skin or their religious beliefs should never change how we think about them or treat them.”

Staenberg has made it his life’s work to keep these stories fresh in our collective memory. Through the Staenberg Family Foundation, he supports dozens of causes throughout the Jewish communities of St. Louis, Denver and Omaha, including the Tri-Faith Initiative and the $25 million renovation of the local Jewish Community Center.

Now, Staenberg and his family’s foundation have made a gift to support a Creighton School of Law program that creates more witnesses — to fight against rising anti-Semitism and Holocaust denial and to keep these stories alive long past the last remaining survivor. To ensure we don’t repeat the atrocities of the past, first we must learn, then we must remember.

In 2012, the School of Law began offering a program for students to learn firsthand about the Holocaust and the world court that emerged in its wake. The program, From Nuremberg to The Hague, combines in-class instruction with immersion trips to the Bavarian city that hosted the 1946 Nazi war crimes trials, as well as The Hague’s International Criminal Court. 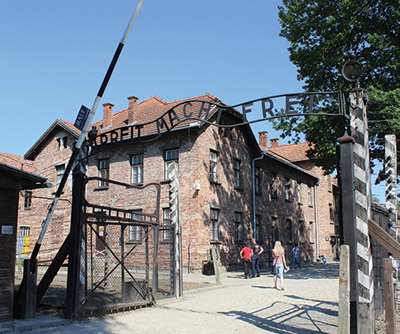 The trip also includes a three-day Holocaust immersion component, with students visiting the Auschwitz concentration camp, the Jewish Quarter in Krakow, Poland, the Oskar Schindler Factory and the Jewish Heritage Museum. This component is vital. It’s also the most expensive part of the program, and Staenberg’s gift will fund student travel and housing costs for years to come.

Each year, dozens of Creighton students return from Europe as new witnesses to an atrocity. They describe the experience as life-changing. “It opened my eyes not only to the injustices of the past but to what we can do about it today,” says Creighton law student Taylor Swift.

In the returning students, the University and leaders in Omaha’s Jewish community saw a great opportunity. Creighton has since partnered with the Institute for Holocaust Education (IHE) and the Jewish Federation of Omaha Foundation to coordinate local education efforts.

In 2021, law students will attend local high school visits coordinated by IHE during its “Week of Understanding” — a program in which Holocaust survivors share their experiences. With fewer and fewer survivors remaining, Creighton will strive to keep their stories alive.

“Through this innovative partnership, Creighton is equipping our most precious asset, our students, to address this particular form of racism in a profoundly meaningful way — one which builds on a historically strong relationship with our Jewish community,” says Michael Kelly, JD, LLM, Creighton professor and Senator Allen A. Sekt Endowed Chair in Law.

Kelly, who accompanies students on the annual trips, says the program continues the law school’s long relationship with the Jewish community. He notes that the namesake of his own endowed title was Jewish, as were Milton Abrahams, BA’26, JD’27, HON’86, and Philip Klutznick, JD’30, HON’56, whose names are honored by the legal clinic and law library. And for more than 20 consecutive years, the law school was led by two Jewish deans — Larry Raful and the recently deceased Rodney Shkolnick.

“Now, with this new and innovative chapter,” Kelly says, “the School of Law more fully joins forces with the Jewish community to engage in Holocaust education.”

The importance of this partnership can’t be overstated, says Howard Epstein, JD’96, executive director of the Jewish Federation of Omaha Foundation.

“This is something that will benefit the whole community, at Creighton, in Omaha and beyond,” says Epstein. “And these programs cannot occur unless people step up to support the causes they believe in, as Michael (Staenberg) has done, again and again.”

As a Creighton alumnus himself, Epstein is thrilled to see the University strengthening its ties to the Jewish community.

“Through my experience at the law school, I recognize that there’s a spirit of inclusivity at Creighton, of equality and fairness to all, a commitment to caring for others. That’s something you don’t see everywhere, and we must continue to embrace it and share it, however we can.”