We have a few famous Bluejays flying around out there. Several Creighton alumni and professors have become influencers, going viral on social media, appearing in national conversations and attracting followers for talking about sports, life, finances, body image and photography. Many have followers in the thousands, and a few have racked up millions. These are some of Creighton’s biggest influencers. 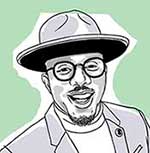 Adedayo Kosoko, BA’05, has more than 22,000 followers on his Instagram page (@thearthype), where he posts his photography work, including things he’s made for Hugo Boss, Gucci, GQ, Facebook and many more.

Recently, he’s been posting photos from a series called Moon Melanin, which “touches on the relationship between melanated people and the moonlight that illuminates us. The moon provides a direct reflection of the sun, and in this light we find aspects of us that have been kept in the shadows.” 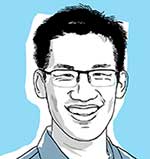 Thomas Wong, PhD, saw a need for a quantum computing textbook, so he wrote one. Then he put it out for free online. His tweet announcing the book’s publication and free download has since been retweeted more than 650 times and earned more than 2,200 likes. Wong, assistant professor of physics in the College of Arts and Sciences, studies quantum computing at the intersection of physics and computer science. “Quantum computers are the next generation of computers, and there is a need for the basics to be taught at the undergraduate level and not just in graduate school,” he says. 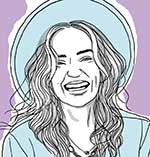 For more than 2.4 million followers on her Instagram account (@danaemercer), Creighton alumna Danae Mercer, BA’09, promotes body positivity, often showing how perfectly posed and exquisitely edited photos distort our perceptions of people’s bodies. A recent post said, “We see these images as casual, momentary snapshots, but in reality they’re each taking 30 to 40 minutes to create. The result is, we look online and we think, ‘Everyone is perfect but me.’” Mercer has written for numerous publications and appeared on Good Morning America. 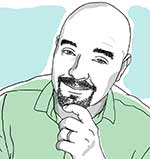 Looking to build your wealth? Check out the TikTok page of Brad Klontz, PsyD, associate professor of practice in financial psychology at the Heider College of Business. Klontz’s page (@drbradklontz) has more than 538,000 followers, and his videos cover a range of financial topics, including financial mistakes, investing, cryptocurrency, 529 plans and the keys to becoming wealthy. His most popular videos have millions of views. In his top video, which has 5.9 million views, he’s wearing a Creighton sweater as he describes the study tip that helped him become a PsyD. 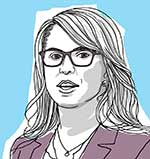 Have you been reading the New York Times lately? Then you might have seen the name of Victoria Haneman, JD, LLM, the Frank J. Kellegher Professor of Trusts and Estates in the School of Law. She has become a go-to expert on all sorts of legal matters for Times reporters, from stories on Britney Spears’ conservatorship to cremation and the funeral business. 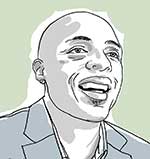 The NBA player, former Bluejay basketball standout and 2007 Heider College of Business alumnus has about 40,000 followers each on Instagram (@tolliver44) and Twitter (@ATolliver44) where he posts on a range of topics, from basketball to family and faith. A real estate investor through his company Say You Can, Tolliver also often posts about investing and building wealth with tips such as, “The best tip I can give anyone that wants to start investing is educate yourself. Read books, find financial literacy mentors that you can learn from,and ask questions. Stay focused on your plan, and put your faith in God.” 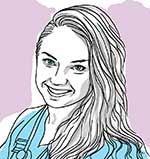 You may have seen pictures of Harmony Latham, BSN’21, bouncing around the web lately. Latham, a former Miss Rodeo USA winner, recently graduated from Creighton’s accelerated nursing program as part of the first cohort from the program in Grand Island, Nebraska. She blogged during the experience for CHI Health, Creighton’s clinical partner. During her journey at Creighton, she wrote about why she chose Creighton, the skills she learned, the friends she made along the way and what’s next. (Hint: She got a great job.)