A young sailor sits hunched in his quarters in San Francisco on a Sunday evening. He’s due to ship out to the Pacific any day now. But right now, there’s only one thing on his mind.

And, curiously enough, the radio in his room seems to know what it is.

Oh Rose Marie, I love you
I’m always dreaming of you

Ensign Cletus Joseph McCann, BS’41, JD’48, makes note of the song — the title track from the 1936 MGM musical Rose Marie — as he scribbles a letter in hasty cursive to his fiancée, Ensign Rosemary Mulligan, BS’41.

The two had gotten engaged just two weeks previously at Colonial Lake in Charleston, South Carolina, when Cletus paid a whirlwind visit to Rosemary at her duty station. Now, Cletus writes, he feels overwhelmed with all the things he wants to say that he can’t seem to put on paper.

“Well,” he writes, “we can make it up when this is all over, and we sit around on an evening telling the children sea stories, and (about) when we were in the Navy — and about Colonial Lake and the great event that took place on its shore.”

The love letter is just one of 100 others that Cletus (who later went by his middle name, Joseph) wrote to Rosemary between December 1944 and October 1945. In meticulous detail, the letters document the young couple’s relationship as they navigated an engagement and marriage during the waning months of World War II.

For any reader, the letters are an almost cinematic glimpse into the personal lives of two young Creighton alumni at a critical turning point in their lives, when their futures were still being shaped by historic world events. But for Maureen McCann Waldron, BA’75, MA’98, retired associate director in Creighton’s Collaborative Ministry Office and the fourth of the couple’s six children, they’re even more precious.

In the letters, I can see the beginnings of the people they both grew to be.
— Maureen McCann Waldron, BA’75, MA’98

“They’re a chance to get to know my parents as young people,” says Maureen, who, after discovering the letters in a drawer at her mother’s assisted living facility after her father’s death, had them copied and bound for her siblings. She has since sent the originals to the Center for American War Letters at Chapman University.

The collection consists of only one side of the correspondence: Cletus’ letters to Rosemary. Maureen suspects that her father, stationed on several vessels during the Pacific Theater of the war, probably had to toss her mother’s letters overboard in the interest of traveling light.

Still, she says, the letters have given her a vivid new perspective on who her parents, now both deceased, were.

“I knew my father as a typical ’50s dad of six children,” Maureen says. “But in these letters, he’s so romantic, so optimistic, so hopeful about the future. In the letters, I can see the beginnings of the people they both grew to be.”

Cletus was born in 1918 in Creston, Iowa. He graduated high school at the age of 16 and eventually enrolled at Creighton.

One night, while a student at Creighton, he went on a double date with another couple. The woman in the other couple was a fellow undergraduate, Rosemary Mulligan. And though the two would remember each other after this date, they went their separate ways.

Cletus graduated from Creighton in 1941 and, following the bombing of Pearl Harbor on Dec. 7 of that year, joined the U.S. Navy. Though he joined as an enlisted man, he was eventually accepted into an officer training program and attended classes at Harvard University in Cambridge, Massachusetts.

Rosemary was born in Omaha in 1920 and grew up on 26th Street in the shadow of Creighton’s campus. She attended St. John’s grade school on campus and, after high school, eventually transferred to Creighton after a year studying at Rosary College in Illinois. She graduated from Creighton in 1941.

With her mother’s encouragement, Rosemary joined the Navy’s Women Accepted for Volunteer Emergency Service (WAVES) program and shipped out to Boston for training.

One weekend in 1944, Cletus McCann attended a Catholic officers’ dance in the basement of a church in Boston. As the story goes, Cletus, who stood over 6 feet tall, spied a tall redhead across the room.

“When I made my way over there,” he later told his children, “standing next to her was little Rosemary Mulligan (5-foot-2).”

The two began talking and, in Maureen’s words, “it was love at second sight.”

The letters begin with Cletus writing to Rosemary from the Naval Operating Base in Norfolk, Virginia. As he will in many other letters to come, he writes about the mundanities of military life: his living conditions (“The quarters themselves are of a war-time structure of small frame buildings, plainly furnished but clean”) and his work schedule (“was plenty glad to hear that I don’t start work until Monday morning. I can use the extra time to catch up on sleep … ”).

Occasionally though, the sadness of the war they were fighting creeps in, such as when Cletus writes of meeting an old professor who “talked long and enthusiastically about the post-war prospects and this ‘G.I. Bill of Rights,’” but also mentioned, “the number of names on the (Creighton) Gold Star list (those who died in service) was increasing rapidly the past few months.”

In early January, Cletus begins writing of his plans to make a trip to Charleston to see Rosemary for the weekend.

“Darling,” begins Cletus’ letter of Monday, Jan. 15, 1945, “So many times today I thought (of) you — and us. I wanted to cry last night as I ran across those tracks to that train — leaving you in Savannah.”

The two had become engaged that weekend in Charleston, and Cletus begins including magazine clippings of engagement ring ads and photos of sailors with their brides.

So begins the couple’s complicated journey of maintaining a long-distance engagement … during a world war. While stationed in San Francisco, awaiting deployment, Cletus writes of his challenges in getting Rosemary an engagement ring: “I’ll try my very best, but darned if I’ll (be) rushed into something I don’t like to get the ring before I leave. If I don’t have time, I’ll get one in Pearl (Harbor) and send it — I’ll still miss out on being there to slip it on that bare-looking third finger, left hand!”

As the weeks pass, Cletus grows frustrated that he’s cooling his heels in California: “I’m a little bitter about the fact that the Navy would only permit me a couple of days in Charleston with you, but keeps me stuck here for a couple of weeks … It’s just a matter of living from hour to hour.”

He writes of morning drills and the difficulties of making phone calls to each other. (“I wasn’t going to call but just had to tell you again that I love you and hear your voice just once more before I leave.”)

In February, he addresses a letter to Miss Rosemary Mulligan. In his next letter, he makes a point of writing Ensign Rosemary Mulligan, underlined, leading Maureen to believe her mother chastised him for neglecting her own military title — the same one as his.

Cletus ships out to Hawaii and later to Guam, Saipan and the Philippines, often having to write vaguely about his duties and whereabouts to comply with wartime censorship requirements. The letters are personal, but occasionally Cletus mentions the war outside. (“Sounds like it’s still rough going on Iwo Jima,” he writes near the end of February.)

His nights are lonely without her, he writes, but he passes them socializing with his shipmates, and most often watching movies. In one poignant episode, he describes one of these movie nights for Rosemary:

“Like any movie in this part of the world, it was shown in an outdoor theater. As the moon came up out of the sea, a huge, yellow, tropical moon, the palm trees gently waving, etc. I could see why poets and songwriters were so enthusiastic about the Pacific islands.”

Whenever he can, he types his letters to avoid what he calls his “school-boy scrawl.” He asks for a picture of Rosemary so that he can say goodnight to it. He sends her pictures of himself and his shipmates. Always, he urges her to write and laments that he receives most of her letters in batches, often weeks late, due to mail delays.

“As long as you continue to do such a faithful job of writing, I know that the time will pass much more quickly and maybe the months won’t seem too long until we can be together,” he writes.

In April, he comments on the death of President Franklin Delano Roosevelt — “even the most bitter anti-Roosevelt men were sad to hear the news,” he says, adding his own personal take: “I hate the thought of this man Truman being president.” In May, the news of Germany’s surrender to the Allies begins to spread: “Isn’t it wonderful?” Cletus writes. “I suppose that it will be some months yet before most (of) the fellows will get back from over there.”

One lonely day, Cletus writes that he briefly wished they had rushed the wedding through in South Carolina or Georgia, but then backpedals: “Of course it will be much nicer to have a real wedding at St. John’s with all our friends and relatives there — don’t you think so?”

By August, he will have his answer. 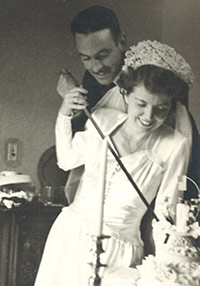 On Aug. 22, Cletus addresses his first letter to Ensign Rosemary McCann. The two were married in Omaha at St. John’s Church on Aug. 14.

Returning to duty in Seattle, Cletus writes that among the back slaps and congratulations, his friends ask him “How many points do you have?” referring to the Navy’s accumulated point system used to discharge sailors as the war effort winds down. Because Cletus and Rosemary were married Aug. 14 — the day before an Aug. 15 deadline — he received an extra 10 points — enough to go home.

Over the next several weeks, through the surrender of Japan in September, Cletus’ letters are filled with excitement for their lives together. As censorship relaxes, the letters become more tender, and Cletus begins signing them as “Smoke Eyes” and calling Rosemary “Mrs. Smoke Eyes.” Their first vehicle together, he writes, will hopefully be “a car and not a small push-type buggy!”

The two would raise six children together, living up and down the East Coast and remaining married until Cletus’ death in June 2002. Rosemary would follow in 2008. Funeral services for both were held at St. John’s. Home at last.

In September 1945, 10 days after Japan officially signed documents of surrender aboard the USS Missouri, Cletus wrote to his new bride, taking a moment to pause and ponder the whirlwind of the previous year.

“Just think what an eventful year this has been,” he writes, at once wistful and optimistic. “It started on 14 January and has been getting better all along. I think the years to come are going to be even better … Those long and peaceful years ahead.” 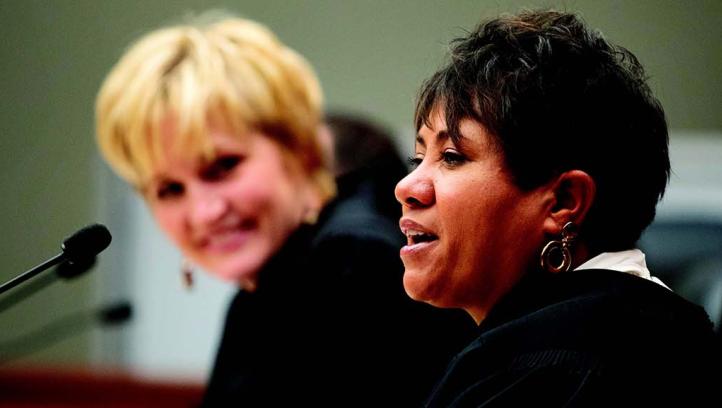 Female graduates of the School of Law who hold top roles in industries from health care to tech share their views on leadership. 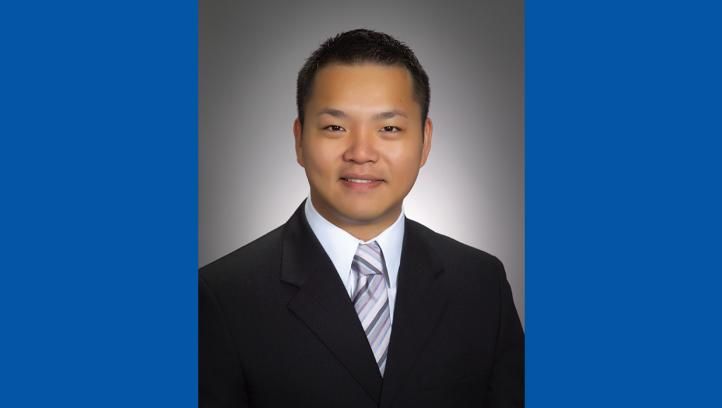 Alumnus and chief surgery resident Andy Yang, researches ways to improve the delivery of health care services based on a patient’s genetics. 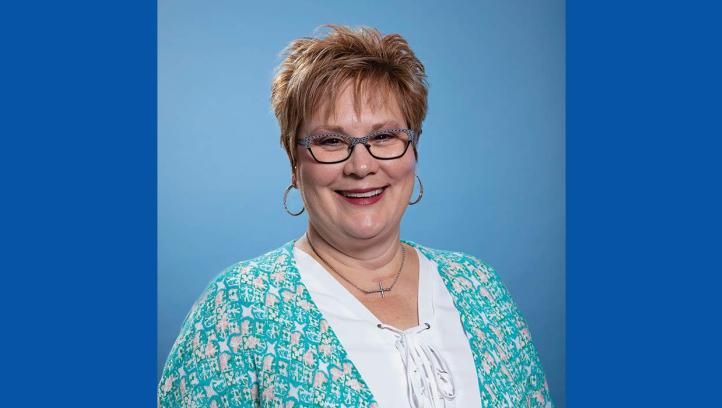 Margaret Begley earned her fifth Creighton degree – a Doctor of Nursing Practice – and worked with the Nebraska Legislature as part of her education.
Close Sidebar