Ralph Duff could not have known when he graduated from the Creighton’s School of Pharmacy in 1956, one of the earliest African Americans to do so, that within a decade life would pry him from North Omaha and catapult him 1,500 miles to California.

Now 88 years old and marking 70 years of marriage to his wife, Jane, Duff’s long life has molded a man of gentle humor and a strong religious devotion sparked by what he terms a “conversion experience” that in 1963 led him to sell Ralph’s Pharmacy at 24th and Spaulding streets in North Omaha and head to the Golden State.

Duff is pure North Omaha, having attended Central Park Elementary School at 42nd Street and Grand Avenue and graduating from Omaha North High School at 36th Street and Ames Avenue. He remembers those years before white flight fondly. He was, he said, the only Black child at Central Park but was largely unaware of the fact.

“During my years there, I didn’t know that I was any different to anybody else,” he says. “I didn’t have any problem or anything else.”

That sense of acceptance continued through his years at Creighton, he says.

He was drawn to the University because its proximity allowed him to live at home
and because it carried a strong academic reputation. He married right about the time he enrolled — before he felt an unexpected call from God to move to California, and years before it became clear that call had a lot to do with his wife’s future.

Duff’s first encounter with racism came after graduation, when he began working at the pharmacy he would later buy and then sell.

“We had one lady who came in and said, ‘Where did you get that working here?’ I was the ‘that’ she was referring to. The owner said, ‘He’s the new pharmacist, Ralph Duff.’ She said, politely, ‘Well, as long as he’s going to be working here, I won’t be your customer anymore,’ and turned around and walked out.

“Long story short, she turned out to be one of my best customers.”

It was after purchasing the pharmacy and naming it “Ralph’s Pharmacy” that Duff experienced his conversion to an active Christian faith and felt a command to hit the road.

“God led me to California,” he says. “It wasn’t a choice that I made specifically, as in ‘That’s what I’m going to do,’ but when you begin to hear His voice, when He begins to direct your life, well, that’s a whole different world.” 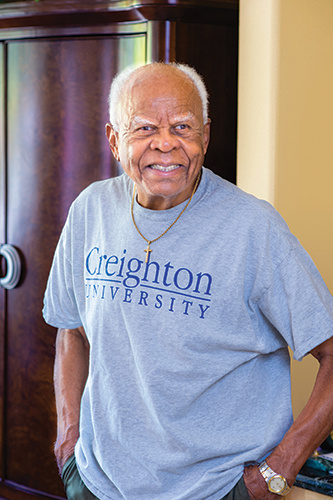 Duff built a successful retail pharmacy practice in California, joining and even leading professional organizations through the years. But, he says, it wasn’t until his wife volunteered to help a new television company that the purpose of his call to California became apparent. The company was headed by Paul and Jan Crouch, who were building the Trinity Broadcasting Network, today the largest Christian television network in the world.

“She answered the phones,” Duff said of his wife. “She was praying in their prayer room when Mr. Crouch happened to pass and the Lord spoke to him and said, ‘That lady is to be your vice president.’

“She didn’t know the front of a camera from the back of a camera, but once she went through a little bit of training she wound up traveling all over for Trinity and putting stations on the air clear down to the islands south of Puerto Rico.”

“She said, ‘I had nothing when I came in here, you trained me, you loaned me the money. I made good, I paid the money back, and here is what God has done,’” Duff says.

“I told her, ‘You just turned them back? Do you realize how much those stations were worth? I could be driving around in a Rolls Royce right now.’ She said, ‘Yes, and I wouldn’t be able to sleep.’”

Duff, who is currently president and CEO of Resources Unlimited Consulting in Irvine, California, has lived a life in harmony with Creighton’s advocacy of living for others.

He served 27 years as a pharmaceutical consultant with the California Department of Health Services and currently serves on the board of directors of the Orange County Rescue Mission, a Christian agency that provides housing and health services to homeless populations.