It is with great sadness that the Heider College of Business shares with its community that Donald Waite, BSC’54, died on June 17 in his home in Saratoga, California.

Don was a former chief administrative officer, executive vice president and chief financial officer of Seagate Technologies, a Silicon Valley data storage service company. After joining Seagate in 1983, he expanded its presence internationally, establishing offices in Singapore, Thailand and Ireland. Steve Luczo, executive chairman of Seagate Technologies, has referred to Don as the “wizard behind Seagate’s curtains” in recognition of Don’s financial prowess.

Don was born in Sioux City, Iowa, and grew up in LeMars, Iowa. He had an affinity for Jesuit higher education. In addition to attending Creighton University for his undergraduate business degree, he earned his law degree from Georgetown University.

The Heider College of Business’ Anna Tyler Waite Leadership Program (ATWLP) is just one example of Don’s generous support of his alma mater. Named for his wife, ATWLP is a four-year leadership development program for students modeled after executive leadership programming. The couple also funded the Anna Tyler Waite End Scholarship Fund at the college.

“Don was a true believer that leaders are not born but made through hard work and experience, and the Anna Tyler Waite Leadership Program provides Creighton students with such an opportunity,” says the Rev. Daniel Hendrickson, SJ, PhD, president of Creighton. 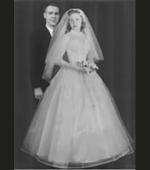 Don was also a man of deep faith, Fr. Hendrickson continues, and was very active in his parish and the Diocese of San Jose. At Creighton, the Waites funded the Anna and Don Waite Endowed Chair in Jesuit Education in 2011, making it possible for Jesuits from across the globe to come to Creighton to share their knowledge with the faculty and students.

Don’s character has had a lasting impression on many in the Creighton community, including Steve Scholer, senior philanthropic advisor at the University, who worked with Don for more than two decades.

“Don had a trademark saying, one I adopted and faithfully use each and every day. When asked, ‘How are you?’ Don would always look you in the eye and say, ‘Never better!’ Even his personal email was NVRBTTR. Don’s life no doubt had its ups and downs, but you would never know it by the smile that was always on his face,” says Scholer.

With Don’s passing, the business community has lost an ethical leader and astute financial mind, and Creighton has lost a long-time friend and generous supporter.