The questions emerged in hospitals — and then the press — with a sudden and tragic speed.

As the COVID-19 pandemic continues to ravage the United States, it has left the nation’s health care providers to wrestle with a number of ethical problems. In the early weeks and months, shortages of ventilators and other important equipment meant physicians and hospital administrators were forced to make difficult decisions about which patients received lifesaving treatment.

Now, as development of a vaccine continues at a rapid pace, ethicists are contending with a whole new set of issues: Who gets access to the vaccine first? And once they are widely available, should they be mandatory?

Creighton University has long challenged its health sciences students to ponder difficult ethical questions as part of its curriculum. The University’s commitment to providing a well-rounded liberal arts education — and its Jesuit, Catholic mission — means that students in all of its schools and colleges are taught that all human life is sacred and cannot be reduced to a checklist of symptoms or a balance sheet of numbers and statistics.

But for the University’s health sciences students, many of whom are poised to enter a workforce forever changed by COVID-19, the pandemic has made ethical exercises that once seemed distant and hypothetical all-too real.

“When I’m handing out a case study to students, there’s something interesting and exciting and strangely comforting when it’s just there on the page. But what happens when the world is falling apart right in front of your eyes?” says Mark Robinson, PhD, assistant professor in the Creighton Graduate School’s Master of Science in Bioethics program. “Part of what we’re dealing with is the vulgarity of reality. This is no longer a simulation. This is life.”

In the Creighton School of Medicine, conversations about addressing the pandemic in the ethics curriculum began in March 2020, says the Rev. Kevin FitzGerald, SJ, PhD, chair of the newly formed Department of Medical Humanities. The department spearheads Creighton’s values-driven approach to medical education, bringing together faculty from outside the medical discipline to emphasize that true healing often transcends the physiological.

As part of this person-centered approach, students in their first two years of medical school participate in ethics and humanities curricula developed by Fr. FitzGerald and Nicole Piemonte, PhD, assistant dean for medical education and an assistant professor of medical humanities, based at the Creighton University Health Sciences – Phoenix Campus.

“I think COVID has helped us introduce the importance of the humanities in a way that students can conceptually understand, given the immediate relevance in front of them,” says Piemonte. “Yes, our curriculum is trying to help them understand epidemiology and virology, but I think COVID-19 has really also brought to bear deep questions about inequity and inequality and suffering and death and dying and policy and political responses, and I think, in our curriculum at Creighton, it’s our duty to address those questions.”

The students engage in this ethical and humanities-focused coursework during their first two years of medical school, while they study the science of tissue and organ systems in the classroom.

“These ethics and humanities pieces are interspersed throughout those other blocks,” Fr. FitzGerald says. “The idea being that, when you are studying this particular organ system, these types of diseases, that’s what the ethics cases are referring to. So, the students aren’t just learning ethical theories, they’re learning how to do ethical decision-making in health care.”

Last spring, as the full scale of the pandemic began to make itself apparent and courses across the University shifted to online learning, Fr. FitzGerald and Piemonte recognized the need to change the ethical scenarios they had planned to address for the rest of the semester. To do so, Fr. FitzGerald says, he didn’t have to look any further than the day’s headlines.

“One thing that was happening in the spring was the concern that emergency rooms and ICUs would be overwhelmed, and we’d run out of equipment such as ventilators,” says Fr. FitzGerald, referencing the crisis in New York City, which, in the early months of the pandemic, overtaxed the city’s health care infrastructure and has so far resulted in more than 20,000 deaths.

So, Fr. FitzGerald presented the students with a problem: Two patients arrive at the emergency room exhibiting severe symptoms of COVID-19. Both are in very similar circumstances — same age, same number of children, same number of comorbidities (other chronic diseases) — but one patient has a good insurance policy while the other does not. If there is only one ventilator to assign between the two, who gets it? The answer, often proposed, is the patient with the good insurance policy, who will more likely be able to pay for the treatment.

Then, Fr. FitzGerald complicates the situation: What if there are other COVID patients at the hospital currently on ventilators who have a far less likelihood of surviving than the two patients who just came in? Say one of them has been diagnosed with terminal cancer. Do you, as a physician, decide to remove that patient from a ventilator and assign the device to the patient with the bad insurance policy?

“It’s frustrating, because any time you think you’ve found the closest thing to the right answer, Fr. FitzGerald gives you a dozen more arguments or perspectives to consider, and then you’re right back where you started,” says Michaela Hoffmann, a second-year student in Creighton’s physician assistant program who took Fr. FitzGerald’s ethics training last spring.

In her coursework, Hoffmann and her classmates were tasked with developing a hospital policy for how to assign a limited number of ventilators at a hospital overwhelmed with COVID patients. In the end, Hoffmann says, “I was so hesitant to value any one life more than another,” that she opted to let the math decide. Her proposed solution involved using a risk-assessment tool to determine which patients had the greatest likelihood of surviving their acute COVID-19 illness and prioritizing those patients as recipients of ventilators.

The point of these exercises, Fr. FitzGerald says, is that there is no right answer. As an institution, all Creighton can do is train its students to think critically about what the best answer is, factoring in the Jesuit values they’ve been taught as part of their medical education.

“The shorthand for this is cura personalis and ‘finding God in all things.’ The idea that in Jesuit spirituality and the Jesuit intellectual tradition, you are trying to comprehend this human being in front of you as the gift from God that this person is, in the midst of that person’s socioeconomic background and family history,” says Fr. FitzGerald.

As the scale of the pandemic reached global proportions last spring, Creighton’s Master of Science in Bioethics faculty were hard at work developing a new course — MHE 610 Introduction to Bioethics — that would not only provide a foundational knowledge to students seeking the degree, but would also be an elective for other graduate students interested in the field.

“One of the things we struggled with at the time was, we knew how big this was going to be, but we couldn’t know what direction it was going to go,” says Helen Chapple, PhD, RN, MSN, professor in the Graduate School’s bioethics program. The following months, of course, would give them more perspective.

The course — due to be offered in fall 2021 — now heavily addresses the ethical issues posed by COVID, Chapple says.

“COVID comes in sort of everywhere,” she says. “It’s the intersectionality of those problems — the weaknesses in the health care system and the terrible fragmentation that (this virus) has revealed.

“It’s not new,” she says. “It’s just newly visible to the world. The problems that are showing up are very old.”

The pandemic, Chapple says, has exposed racial and socioeconomic disparities that have long festered in the U.S. health care system. For example, in Douglas County (in which Creighton’s main campus is located), 80% of people who tested positive for COVID-19 were nonwhite, as of June 2020.

In addition, the Douglas County Board of Health recently adopted a resolution declaring racism a public health crisis. In the resolution, the health department cited data showing that the average life expectancy in predominately Black North Omaha is 10 years below that of mostly white West Omaha.

The amount of interest in the field, Chapple says, has exploded since the scale of the pandemic became apparent. It only grew in the wake of the widespread social unrest in the U.S. following the killing of George Floyd at the hands of Minneapolis police, which renewed conversations about structural racism embedded in national institutions, public and private.

“The explosion of interest in some of these issues has also been overwhelming,” Chapple says. “The data that has been coming our way, the articles that have been popping up on every front regarding this have been difficult to keep up with.”

These types of health disparities are addressed throughout Creighton’s Bioethics Program, led by program director Sarah Lux, PhD. The degree program seeks to provide students with the education needed to address moral and ethical challenges — such as end-of-life care, pain and suffering, research ethics and health disparities — in all health care areas, Lux says.

“Bioethics in the United States began as a kind of offshoot of philosophy and religion, and its roots are still there,” Chapple says. “It started out as a kind of quandary ethics — ‘What do we do about this particular patient when there’s more than one right answer?’ It’s a sort of decision-making tool, in which you look at moral authorities and draw on them in terms of deciding which things are right.”

In the new material addressing the pandemic, faculty plan to emphasize that in-depth guidelines to mitigate the impact of widespread disease have been developed by several health organizations — including the World Health Organization and the Centers for Disease Control and Prevention. Mark Robinson, assistant professor in the program, says the U.S., under previous presidential administrations, has had bioethicists on hand to consult in the event of a pandemic.

The current situation in the U.S., Robinson says, starkly illustrates the importance of preliminary planning — having written procedures in place in the event of an emergency — as well as critical thinking around issues such as health disparities and access to health care.

“This is a moment in history in which many moral decisions are being made that will have enormous effects on a lot of people for a long time,” Robinson says. “It’s also a unique moment in which engaging in conversations with other experts — national leaders, policy experts — about developing an algorithm to help physicians make decisions about allocating resources is an enormous task.”

What data should such an algorithm consider? How should it be applied — by the physicians treating the patients, or by a board of objective observers tasked with making the final call?

These are questions the bioethics faculty aren’t trying to solve for their students, but are rather encouraging them to consider throughout their degree program. Each situation, each hospital, each locality, will have different criteria to consider, and ethicists evaluating them will have to draw their own unique conclusions based on the best available data.

“In that sense, our curriculum really does work, really does matter. But what we do outside the classroom matters more — our engagement with the community, with other departments, other initiatives,” Robinson says. “I can’t imagine teaching this course at any other time in my life, at any other place in the world. It’s just the perfect course for the situation that we’re in right now.” 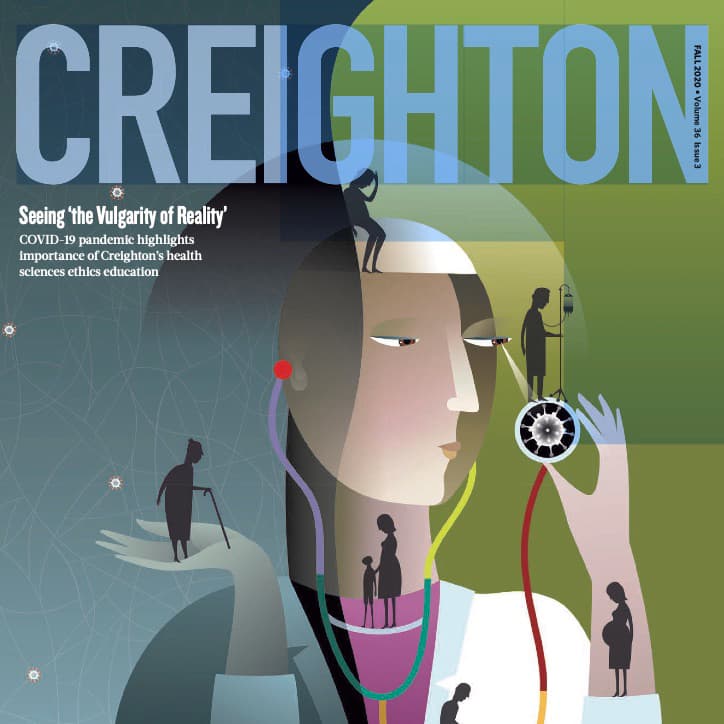 This article was previously featured in the Fall 2020 issue of the Creighton Magazine. 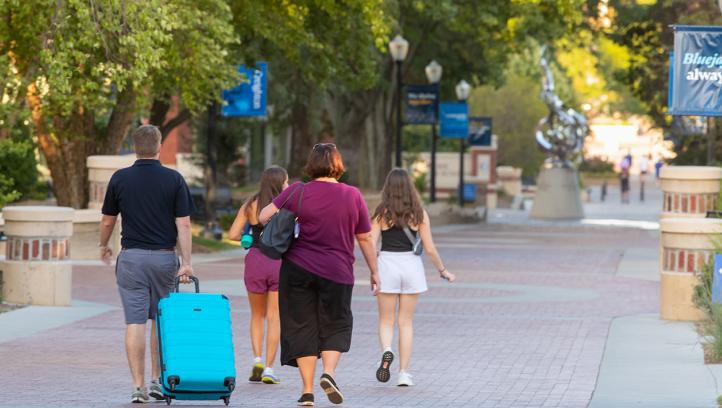 How to help your student deal with homesickness 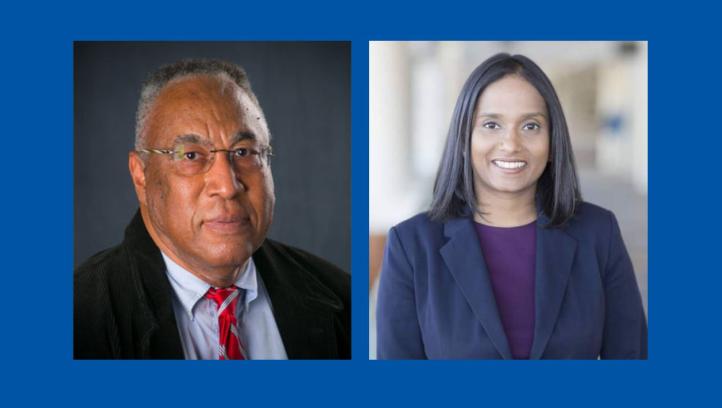 The Creighton University School of Medicine has established four goals as it pursues a policy of diversity, equity and inclusion.