Heider business students apply skills and knowledge in nonprofit sector and learn that business is about connection.

Character, competency and chemistry. These are what Creighton University’s students bring to the table, says Ian Vickers, CEO of Global Partners in Hope (GPiH), a local nonprofit that brings essential services to developing countries in Africa, Latin America and Asia. 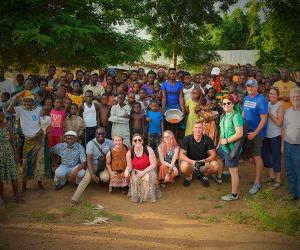 This group is the largest contingency of Creighton students the nonprofit has employed to date.

Vickers says the organization has historically enlisted the help of Creighton business students, with more than a few continuing on to work full time at GPiH after graduation.

“We find that the interns enjoy exploring work with an international nonprofit and discovering that it was not at all what they assumed, that they were able to apply many of their business skills with the objective of bringing good to the world,” Vickers says.

So true, agrees Redmond. She first heard about GPiH when Vickers, who is also an adjunct instructor of international management at Heider, was a guest speaker in one of her marketing classes. Drawn to his message, Redmond approached Vickers after class and later continued their conversation at GPiH offices. The conversations culminated in a marketing internship.

In addition to overseeing all GPiH’s social media platforms, Redmond also produces its monthly newsletter, has tried her hand at event planning and, true to nonprofit fashion, pitches in wherever needed.

But the highlight of her internship has been the 10-day trip to Africa this summer. The group traveled to Togo to dedicate a new health center that took just over a year to build. 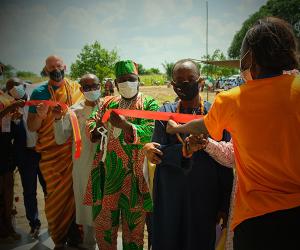 “During the dedication, the business students were able to witness firsthand an extraordinary cross-cultural event and participate in a project that will provide health care to a population for the first time in centuries,” says Vickers.

Once the health center celebration was over, the group shifted focus to the organization’s next large-scale project when they visited the site of a planned water well. GPiH delivers hope in the tangible form of water, medical care, clean energy and education. Its Togolese focus is on clean water and proper health care.

“GPiH appreciates Creighton students and their ability to interact on a professional level,” Vickers says. “Although the trip to Africa moved them out of their comfort zone, they interacted well with local officials and embraced the new challenge of the day with a positive attitude throughout the entire experience.”

“There was so much to absorb in such a short amount of time,” Redmond says of her time in Togo. But the big lessons learned far surpassed the obvious need for drinkable water or reliable, safe healthcare. She witnessed simple selflessness that humbled her and pure joy that was infectious.

Perhaps most meaningful was her visit to an orphanage established by a woman who was an orphan herself as a child and who was abused while in care. Instead of descending into anger or seeing herself as a victim, she proactively channeled her painful experience into making her sphere of the world a better place.

“She was one of the most kind and loving women I have ever met,” Redmond says. “It very much puts into perspective your own attitude about your own ‘struggles’ in the world and how you react to them, and how kindness can go a long way.”

Redmond says that Global Partners in Hope doesn’t frame the Togolese as helpless victims but celebrates them and helps provide them with life-sustaining resources. “This is something that I want to take forward with me, to remember to celebrate life, to celebrate people and to keep a perspective of hope,” the St. Louis native says. 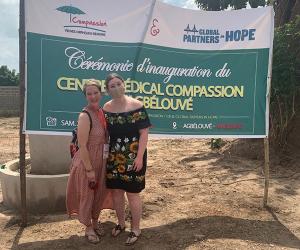 That Redmond was able to attain these incredible lessons directly is emblematic of multiple Heider Mindsets – Collaborative, Cross-Cultural, Service and Reflective – and representative of the overall Creighton experience. She says she sees her business education as one that connects people. If she had not been in a particular marketing class, she would not have met Vickers, nor would she have been so moved by GPiH’s mission that she wanted to intern with the organization.

Which means she’d have never met the Togolese woman who turned personal tragedy into a loving orphanage. Or had her perceptions of Africa as a poor and dangerous continent challenged.

“Creighton professors know that while learning class material is important, the most important thing to learn in college is how to meet people and form relationships,” says Redmond, “because that is what will open the doors of opportunity.”

For Redmond and her fellow Heider interns, opportunity is an internship with Global Partners in Hope and connection to the people of Togo.