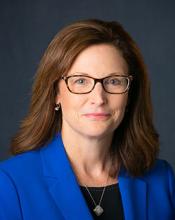 Prior to assuming the executive vice president role, Madsen served as chief financial officer and treasurer for West Corporation with responsibility for leading over 400 employees in 28 countries and managing global financial operations including treasury, accounting, planning and forecasting, external and internal reporting, tax and internal audit.

Madsen has also held various finance and operating roles at First Data Corporation, including segment chief financial officer and senior vice president of six sigma quality, earning her certifications in six sigma process improvement methodologies.  Prior to First Data, she was a manager at an international public accounting firm.

Madsen received her B.S.B.A. in accounting from the University of Nebraska-Lincoln.  She is affiliated with Big Brothers Big Sisters of the Midlands and has served on the Boys Town National Board of Trustees with appointments on the audit and finance and executive committees.  Madsen is a member of the Nebraska Society of Certified Public Accountants.