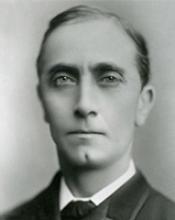 Roman A. Shaffel, SJ, (1838-1908) had the unenviable task of being the first Jesuit in charge of the fledgling institution. Workers laid the cornerstone of the college in August 1877. In anticipation of the college’s opening in January 1878, Fr. Shaffel arrived early from Chicago, but construction delays postponed the first classes. Fr. Shaffel finally moved into his room at Creighton College in July 1878. On  Sept. 2, 1878, 120 students were welcomed to the college. Fr. Shaffel served as both president and prefect of studies (the equivalent of today’s “dean”), and oversaw a faculty composed of one priest, three scholastics and two laymen.

Even though it was known as a “college,” much of the initial coursework was at a secondary (high school) level. In 1878, the Creighton College of Arts and Sciences, the University’s oldest and largest division, was founded. Students were educated according to the Jesuit curriculum of Ratio Studiorum, which emphasized classical learning. In 1880, Creighton opened its first library with books from storage that had previously been used at St. Joseph’s College (Bardstown, Ky.), a Jesuit institution that had closed during the Civil War.

Mary Lucretia Creighton’s will left money for the school to the Catholic Church in Omaha, and it was Bishop James O’Connor who invited the Jesuits to operate the college. In 1879, the bishop transferred his deed of trust to the Missouri Province of the Society of Jesus, and “The Creighton University” was incorporated under Nebraska law that same year. It was not until 13 years later, in 1891, that the first baccalaureate degree was awarded.

Fr. Shaffel was born in 1838 at Desteldonck, Belgium, as Romanus A. Verschaffel. He was at St. Ignatius College (now Loyola University Chicago) before coming to Omaha. After serving as president, Fr. Shaffel remained at Creighton in the newly created office of vice president. He retained his title as prefect of studies, and became the director of the Sodality of the Virgin Mary. Fr. Shaffel acted as rector of Omaha’s Holy Family Church, and was appointed Vicar-General of the Omaha Diocese (1883-89). His next position was as the last president of the St. Francis Institution at the Osage Mission in Kansas. It was Fr. Shaffel’s task to close the school on behalf of the order. In 1891, he relocated to St. Louis, Mo., where he died in 1908.