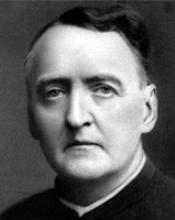 Thomas S. Fitzgerald, SJ, (1848-1910) became Creighton College’s president in March 1889. During his administration, the College prospered, but already there were indications of future financial woes. After his service at Creighton, he returned to Chicago to oversee St. Ignatius College (now Loyola University Chicago).

In 1889, Creighton sought permission from the Missouri Province for Edward, Charles and John Furay Jr. (nephews of John A. Creighton) to become the College’s first graduating class. Father Provincial John P. Frieden, SJ, ruled that a graduating class must consist of at least six students. Fr. Fitzgerald strongly protested, and during a visit to Omaha, Fr. Frieden threatened to pull the Jesuits from the College if his injunction was not followed. The boys transferred to St. Mary’s College in Kansas to complete their degrees. On June 24, 1891, Creighton College graduated its first class of five students.

Fr. Fitzgerald immigrated with his parents from Ireland to Chicago. He attended St. Louis University. His pursued philosophical and theological studies at Woodstock College (Woodstock, Md.). He taught rhetoric at St. Xavier’s College (Cincinnati). In 1884, he was appointed president of the newly opened Marquette College (Milwaukee), a position he held until 1887. Fr. Fitzgerald served as dean of college at Marquette, then was director of an institute at St. Ignatius College (Chicago). From 1894 to 1889, he served as the sixth provincial of the Missouri Province, and later represented the province in Rome, Italy, in 1899. Fr. Fitzgerald was pastor at Church of Gesu in Milwaukee for 11 years until his death in 1910.