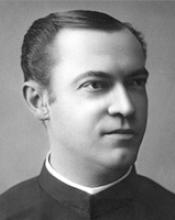 James F. X. Hoeffer, SJ, (1852-1913) was inaugurated as Creighton’s president on July 15, 1891. Little did he know he would oversee a difficult time not only for the College, but also Omaha’s Catholic community. The “Panic of 1893” took a heavy economic toll on Omaha and Nebraska. It caused enrollment to plummet, which adversely effected the school financially. Fr. Hoeffer abolished the preparatory course, a remedial program for boys age 12 and older, and raised the standards for admission.

Rampant, violent anti-Catholic feelings swept Omaha led by the American Protective Association (APA). The APA claimed Catholics were using politics to get rich, that new convents and churches were being built as fortresses, and parochial schools constituted a great evil because they supposedly taught only religious dogma. To counter the APA, Fr. Hoeffer, a popular preacher and orator, delivered a lecture titled “The Jesuits.”

Creighton College made its transition to university status on May 3, 1892, when the “John A. Creighton Medical College” was established as a department of the University. The Medical College was affiliated with the Creighton Memorial St. Joseph Hospital, a new 200-bed facility named in honor of Sarah Emily Creighton. Thirty-six students from six states were registered the first year, including Kate Drake, Creighton’s first woman student. In accordance with prevailing standards of the time, the Medical College offered a three-year course of study, but soon became a four-year program. Fr. Hoeffer, besides helping start the Medical College, delivered a series of lectures on medical jurisprudence.

Fr. Hoeffer was born in 1852 in Cincinnati. He was on staff at St. Louis University before becoming its president (1898-1900). In 1896, he left Creighton to serve as president of St. Ignatius College (now Loyola University Chicago). Fr. Hoeffer died in Chicago at St. Anthony’s Hospital in 1913.