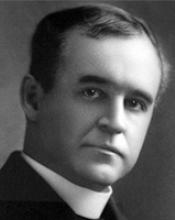 Eugene A. Magevney, S.J, (1855-1919) became president in February 1908 and served until the summer of 1914. Under his leadership, the University was placed on solid financial ground, many new developments took place, and total University enrollment nearly doubled to almost 1,300 students. The Medical College laboratory was constructed, and the Law School library was purchased and installed. Around 1912, the College of Arts and Sciences increased from three to four years of study. The only new department under Fr. Magevney was the Summer Session, which opened in 1913 to provide teacher training for nuns.

Extracurricular activities grew during this period with the formation of the Glee Club, intramural sports such as track and basketball, and the growth of intercollegiate athletics. The first student activity fees were charged to cover admission to plays, Glee Club performances, varsity athletic contests, debates and a subscription to The Creighton Courier.

Fr. Magevney also consolidated the graduations of the professional schools, which had each held their own commencements. In late 1913, the Creighton University Alumni Association was formed to promote fellowship among alumni of all colleges.

On March 23, 1913, the devastating Easter Tornado struck Omaha. Although the University escaped unharmed, many Medical College faculty and students attended to citizens needing treatment.  Nearly 700 University students assisted with the city-wide clean up in April.

Fr. Magevney was born in Memphis, Tenn., in 1855. He studied at St. Louis University and Woodstock College (Woodstock, Md.). Fr. Magevney was professor of rhetoric at Marquette University and later St. Louis University. At Detroit College (now University of Detroit Mercy), he served as preceptor of elocution and on the board of trustees, along with former Creighton University President Hugh M. Finnegan, S.J. Prior to his appointment at Creighton University, Fr. Magevney served as vice president of St. Ignatius College (Chicago). He authored several books related to education: Christian Education in the First Centuries, Christian Education in the Dark Ages, The Reformation and Education, Systems and Counter Systems of Education, and The Jesuits as Educators. He died in Brooklyn, Ohio, in 1919.