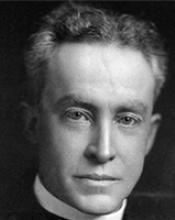 At the onset of World War I, he gave control of Creighton University and St. Joseph’s Hospital to the U.S. government. Fr. McMenamy was drafted and made it clear that he was willing to serve his country, if the government deemed it necessary. The Student Army Training Corps (SATC) program was implemented, but not until late in the war. The SATC program lasted only the fall semester of 1918.

Student life and intercollegiate athletics improved with the construction of a new gymnasium. The facility opened in September 1916 and included a basketball court for varsity games and intramurals, as well as a swimming pool, bowling alley and billiards room.

Fr. McMenamy was born in Normandy, Mo., in 1872. He attended St. Louis University, studying philosophy and theology. In 1899, he was at Marquette University, and later taught humanities and philosophy at St. Louis University. Fr. McMenamy left Creighton University when appointed provincial of the Missouri Province (1919-26), and at 46 years old became one of the youngest to attain that rank within the order. In 1920, he was in charge of placing Jesuit schools on the “American plan.” Fr. McMenamy believed such changes retained the traditional substance of the Ratio Studiorum while integrating contemporary educational procedures. He served as tertian master, overseeing novitiates prior to ordination, in Parma, Ohio, for nearly 20 years. He died there in 1949.