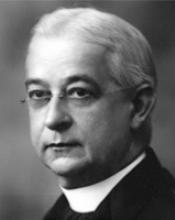 Under John F. McCormick, SJ, (1874-1943) many changes were made at the University: several new buildings were erected; a new college was opened; intercollegiate athletics grew in prominence; and for the first time in its history, tuition was charged. By 1920, the University’s enrollment surpassed 2,000.

In 1919, the Dental College program increased to four years. The following year, Creighton College of Commerce, Accounts and Finance (now the College of Business) opened in response to a need for training in modern business methods, the fundamentals of finance and the essentials of journalism. At the end of four years, students would graduate with a Bachelor of Science (B.S.) in Commerce.

The College of Law and College of Dentistry each moved into their own new buildings along California Street in 1921. In 1923, Fr. McCormick announced plans to spend nearly $1 million on new construction, which included a new library, stadium, science building and dormitories; however, the building and endowment fund campaign fell well short of its goal, curtailing expansion plans. In 1924, the University began charging tuition, in part to generate revenue for campus expansion.

The athletic program at Creighton was solidified in 1922 with the hiring of Arthur A. Schabinger as director of athletics and basketball coach. He made Creighton basketball known throughout the nation by scheduling games against powerhouses such as Kentucky and Kansas. In 1924-25, the University began the construction of a new, large football stadium that could seat over 20,000 spectators.

Fr. McCormick was born in Chicago in 1874. He attended St. Ignatius College (now Loyola University Chicago), and St. Stanislaus Seminary in Florissant, Mo. Fr. McCormick was vice president of St. Ignatius College in Cleveland (now John Carroll University) and a professor at St. Xavier College (now Xavier University) in Cincinnati. He served as vice president/dean of Marquette University for a short period. After leaving Creighton, he returned to Marquette University, where he taught philosophy and acted as a regent of the College of Journalism and the Graduate School. Fr. McCormick served as professor of philosophy at Loyola University Chicago from 1932 until his death in 1943. He published nearly 50 articles for magazines and scholarly journals, and he co-edited or authored several philosophy and theology books.