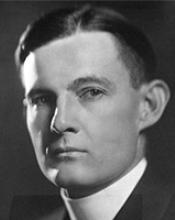 William J. Grace, SJ, (1882-1959) came to Creighton University in 1920 to serve as professor of education and dean of the College of Arts and Sciences, two posts he held until becoming president. He assumed the presidency upon Fr. John McCormick’s departure in September 1925, but was not officially inaugurated until November. Fr. Grace’s inauguration, which took place over the course of three days, coincided with homecoming celebrations and included ceremonies representing the religious, civic and academic facets of the University.

Educational opportunities for women increased during Fr. Grace’s tenure. In July 1925, Duchesne College (1915-68) and Creighton University entered into an agreement, and Duchesne became “The College for Women of The Creighton University.” Duchesne students were able to take a full course load in arts and sciences at Creighton by matriculating at Duchesne. Although the formal merger took place under Fr. McCormick, it was Fr. Grace and Mother McMenamy, of Duchesne, who implemented the arrangement. The School of Nursing at St. Joseph’s Hospital became affiliated with the University during this period.

In 1926, a dean of Graduate Studies was appointed, marking the beginning of the Graduate School. Creighton University had conferred its first master’s degree in 1893, but since then, post-baccalaureate work was considered an extension of the undergraduate colleges.

Fr. Grace, a native of St. Louis, took all of his scholastic work at St. Louis University, where he was a member of the collegiate baseball team. Before coming to Creighton, he taught at St. Ignatius College in Cleveland (now John Carroll University) and St. Xavier College in Cincinnati (now Xavier University). Upon transferring away from Creighton, he served as dean of the Marquette College of Liberal Arts. He was author of The Catholic Church and You: What the Church Teaches and Why. Fr. Grace died in 1959.