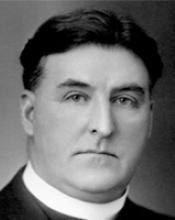 William H. Agnew, SJ, (1881-1931) became Creighton’s president in late summer 1928, the year the University celebrated its Golden Jubilee (50 years). Although he often spent time at the Mayo Clinic and St. Mary’s hospitals in Rochester, Minn., for a serious illness, he remained highly involved with the University’s continued growth.

In the spring of 1929, Fr. Agnew visited schools in Chicago and Detroit accompanied by architect Leo A. Daly, with a mind toward further Creighton expansion. In 1930, the Administration Building received a new facade, which placed the main entrance on the south side of the building facing California Street. A modern central heating plant for the University was erected.

Nursing was added to the University curriculum in 1928. The program provided two years of liberal arts studies in conjunction with the nursing programs at local Roman Catholic hospitals. In 1929, the College of St. Mary affiliated with Creighton University, effectively making it Creighton’s second sister institution (along with Duchesne College). The Pharmacy School, although enjoying increased enrollment, was threatened with closure. Fr. Agnew studied the matter, and his decision allowed it to remain open.

Enlargements and improvements were made in several departments. The dental clinic, which had been operating with obsolete equipment, was outfitted with modern electrical tools. Fr. Agnew took great interest in the Medical College, which gained new laboratories for microscopic work, an improved reference library and humane quarters for research animals. A physicist and geologist by training, Fr. Agnew also spent $15,000 on equipment and general scientific facilities.

In December 1930, it was announced that a student loan fund would be established as the Fr. Agnew Student Loan. The purpose of the loan fund, with donations from students and faculty, was to assist needy and deserving students in finishing their college studies.

Fr. Agnew was born in Westphalia, Kan., in 1881. He studied at St. Stanislaus Seminary and St. Louis University, receiving three degrees. Fr. Agnew taught at St. Mary’s College (St. Mary’s, Kan.) and at St. Louis and Loyola Chicago universities. Prior to coming to Creighton, he was president of Loyola University Chicago (1921-1927). He was retired by the rules of the order, and took over the pastorate of Sacred Heart Church in Chicago. He served as editor of Queen’s Work, a monthly national Catholic magazine, and as a lecturer for the National Catholic Welfare Conference, regarding social and educational topics. Beginning in 1923, he was a consult of the province. Fr. Agnew died from cancer in Rochester, Minn., in early 1931, and his body was moved to Omaha. Over 4,000 attended his two funeral masses at St. John’s Church, and he was interred at Holy Sepulchre Cemetery.