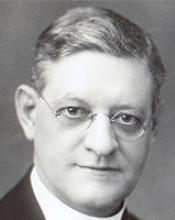 Before becoming president in 1931, Patrick J. Mahan, SJ, (1880-1938) served as acting regent of the School of Medicine. Not surprisingly, during the Great Depression, Creighton University suffered a shrinking endowment. Despite this fact, St. John’s Hall was remodeled and renamed “Wareham Hall,” and Dowling Hall was erected in 1934 for upperclassmen.

Fr. Mahan believed in strengthening the faculty and improving the curriculum. The School of Journalism, after nearly a decade with Commerce and Finance, became its own department in 1933. The School of Journalism was coeducational and offered three different degrees (BA, BS, PhB.). At the time, Creighton was one of fewer than 40 American universities with a dedicated journalism school. Mercy and St. Bernard’s hospitals in Council Bluffs, Iowa, were acquired by the Medical College in October 1931. Clinical classes and an intern program were instituted at Mercy Hospital.

A greater emphasis was placed on philosophy for graduate students. There were lecture courses for non-Roman Catholic students that included ethics and morals, as well as an annual non-Catholic conference during the time that the Roman Catholic students were at retreat. Fr. Mahan was a proponent of college athletics, and he appointed Marchmont Schwartz as athletic director and football coach, as well as Eddie S. Hickey as business manager and basketball coach. The number of Creighton University alumni clubs increased from two to more than 34 and spanned the country from coast to coast.

Like his predecessor, Fr. William Agnew, Fr. Mahan also suffered from poor health, and from December 1932 to February 1933, he took a sabbatical, leaving Fr. Thomas J. Smith as acting president. During this period, Fr. Mahan visited Jesuit schools in the South and along the West Coast. He noted that the Depression had not decreased enrollment at Jesuit institutions; however, decreased income left schools carrying students who were unable to afford tuition. Fr. Mahan believed student activities and intercollegiate athletics were areas where Jesuit university budgets had to be curtailed while keeping the essentials.

Fr. Mahan was born in St. Louis in 1880. He attended St. Louis University High School and St. Louis University. He served on the faculty at St. Ignatius High School (Chicago, Ill.) for six years and at St. Mary’s College (St. Mary’s, Kan.) for one year. In 1918, Fr. Mahan was appointed regent of the Loyola University Chicago School of Medicine. He was the diocesan director of hospitals in Chicago and vice president of the Catholic Hospital Association for seven years. Fr. Mahan authored numerous articles regarding hospital organization. He died in 1938.