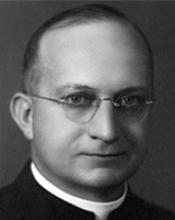 Joseph P. Zuercher, SJ, (1897-1957) became Creighton president at the age of 39, making him one of the youngest presidents in school history. Fr. Zuercher took office in May 1937 and served until December 1943. He oversaw the transition from the Great Depression to World War II.

By early 1942, Creighton was forced to change coursework for the war. Fr. Zuercher announced that the College of Arts and Sciences, University College, College of Commerce, and School of Journalism would be modified to allow students to graduate within three years. Law and nursing were already on three-year tracks, and plans were in place to condense other professional programs.

Fr. Zuercher was clear that academic standards would not be sacrificed with the “speedup.” Students would carry a heavier academic load, semesters were elongated, and vacations were shortened. In March 1942, Fr. Zuercher announced that the Medical and Law Colleges would begin a three-year plan through the elimination of summer break. Creighton University was selected as a training center for Army Air Corps cadets, and Dowling and Wareham Halls were converted into barracks. By the end of the 1942-43 academic year, 85 percent of the male student body had enlisted in the reserves.

Student life on campus changed, as well. No yearbooks were published because of the shortage of materials during the war. An obstacle course was set up on the south side of the football stadium, and all male students were expected to utilize it to remain in good physical shape. The football stadium fell silent after the 1942 season, as the team was disbanded, primarily due to the war.

Fr. Zuercher was born in 1897 in Brodhead, Wis. He was educated at Campion College (Prairie du Chien, Wis.), St. Louis University and Gonzaga University. From 1922 to 1925, he was assigned to the St. Francis Indian Mission in St. Francis, S.D. Along with Fr. Thomas Bowdern, he co-organized the Camp De Smet Summer Camp for boys. He arrived on Creighton’s campus in 1932 to act as dean of residency and assistant dean of the College of Arts and Sciences. For four years, he was the dean of the College of Arts and Sciences. Fr. Zuercher left Creighton to become provincial of the Missouri Province, serving a seven-year term. The installation ceremony for Fr. Zuercher as provincial and Fr. Thomas S. Bowdern as Creighton president was the first in the history of the province to take place simultaneously, as well as outside of St. Louis. In 1950, Fr. Zuercher became rector of the St. Francis Indian Mission. That same year, he was part of a Jesuit delegation to Rome. He died in 1957.