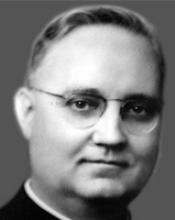 Thomas S. Bowdern, SJ, (1892-1983) served as dean of Creighton University’s Graduate School for a dozen years and became president in late 1943, when Fr. Joseph Zuercher was promoted to provincial in St. Louis. The installation ceremony for Fr. Zuercher as father provincial and Fr. Bowdern as Creighton University president took place in Omaha. It marked the first time in the history of the province that these celebrations took place simultaneously, and away from the provincial headquarters in St. Louis.

World War II loomed over Fr. Bowdern’s tenure. Wareham Hall was a barracks for Army Air Corps cadets during the 1943-44 school year. The accelerated programs implemented at this time required a standard academic year, plus summer sessions and increased credit requirements for graduation. By the end of the war, the University was financially ailing. It was feared that all of the professional programs would have to be closed, and there was a premature announcement made regarding the closure of the Dental College. In the fall of 1944, the University resumed its pre-war schedule. At war’s end, 2,645 Creighton men and women had served their country – with 132 counted among the war’s fatalities.

In September 1944, Fr. Bowdern submitted a long-range city master plan on behalf of the University. It was designed to transform the northwest area of downtown into an educational and civic center with several landscaped malls. Although studies and architectural plans were made, the plan did not come to fruition.

Fr. Bowdern was a St. Louis native, who attended St. Louis University, earning three degrees there. In 1925-26, he and Fr. Zuercher co-organized the Camp De Smet Summer Camp for boys. Fr. Bowdern served on the faculty at St. Louis University, as dean of the School of Education. He was an instructor at St. Ignatius High School (Chicago, Ill.) and Loyola University Chicago. While president of Creighton, Fr. Bowdern was active in several civic and educational organizations. In March 1946, he was assigned to Queen’s Work in St. Louis, a magazine for sodalities (devotional and charitable societies for Roman Catholic laity). Fr. Bowdern was associate director of the Institute of Social Order, a Jesuit organization focusing on social work. He returned to Creighton to teach education in the fall of 1951, and later went to Rockhurst College, where he retired in 1976. Fr. Bowdern was an activist for racial equality and women’s rights. He died in 1983 at St. Mary’s Hospital in Kansas City, Mo.