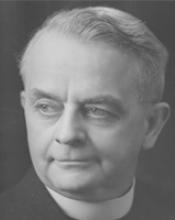 Inaugurated on Christmas Day 1945, William H. McCabe, SJ, (1893-1962) officially became president in January 1946. As difficult as the war years were, it was equally as difficult to place the University back on peacetime footing. Fr. McCabe sent a letter to students and alumni seeking housing for the increased number of veterans on campus.

In February 1946, football, which had been suspended since 1942, was officially dropped from intercollegiate athletics due to several factors, but primarily for economic reasons. Several times over the next few years it was suggested that the football program be revived, but Fr. McCabe steadfastly refused.

University enrollment hit a record high of 2,246, with 62 being veterans. In 1947, television cameras from WOW-TV showed four members of the Department of Surgery removing an abdominal growth in the operating room at St. Joseph Hospital. Although it was only viewed on closed-circuit, the purpose of the demonstration was to test the use of television for medical teaching.

Fr. McCabe grew up near Iowa City, Iowa. He attended Creighton for a brief period before deciding to join the novitiate in Florissant, Mo. While he didn’t graduate from Creighton, he became the first former Creighton University student to rise to the post of president. Fr. McCabe was ordained at Engheim, Belgium, while there furthering his studies. He earned his BA and MA degrees from St. Louis University, and a PhD in English from Cambridge University (England). Fr. McCabe taught English at St. Louis University for a decade before becoming president of Rockhurst College in Kansas City, Mo. While at Creighton, he also served as vice president and president of the Nebraska Association of Church Colleges (NACC). After leaving Creighton, he taught English at Marquette University. He died in Milwaukee in 1962.