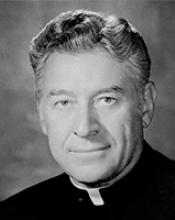 Carl M. Reinert, SJ, (1913-1980), only 37 years old when he became president, came to Creighton University from his position as principal of Campion High School in Prairie du Chien, Wis. He is considered the University’s “second founder.” Fr. Reinert made Creighton truly coeducational, significantly increased enrollment and revitalized campus with the construction of many new buildings. It is estimated that 20,000 students were educated during Fr. Reinert’s term.

By 1950, University enrollment had dropped sharply, but by the time Fr. Reinert left office, enrollment had more than doubled to more than 5,600 students. In the three years leading up to 1952, enrollment in the non-professional and law colleges dropped by 26 percent, and all segments of the University were operating at a deficit. The Medical and Dental Colleges were carrying heavy debts. Fr. Henry Linn, executive assistant to the president, stated that the priority of the professional schools was to cover the deficit and retain high rankings nationally. The largest task at hand was to raise money for operational rather than construction costs.

In 1955, Creighton Nursing streamlined its program, which had been spread among several local hospitals, by offering a full BSN program within the College of Arts and Sciences. The College of Commerce, Accounts and Finance’s name was changed to the College of Business Administration (COBA) in 1956. In 1958, Creighton Preparatory High School moved from the University campus to a 35-acre campus at 72nd Street and Western Avenue, where it remains today.

University construction had slowed in the previous decades, and many campus buildings were considered dilapidated. Fr. Reinert launched a $200 million building campaign. During his presidency, the campus was expanded and many new buildings were erected. Deglman Hall (a residence hall) and the Brandeis Student Center both opened in the fall of 1956. October 1961 witnessed the dedication of three new buildings: the Eugene C. Eppley building for COBA, the Alumni Memorial Library and Gallagher Hall. The new library accommodated 450 students (compared to 170 in the previous location), featured open stacks, and offered several private rooms for listening to music and language recordings. After two decades of football’s absence, Creighton Stadium was razed in 1962 for the development of the Dr. C.C. and Mabel Criss Health Science Center.

After resigning in 1962, Fr. Reinert became vice president of University Relations and president of the Development Foundation. In 1979, the Creighton University Board of Directors announced that the library would be named for Fr. Reinert after an addition was completed. Fr. Reinert was active in the community, and he was lauded with an honorary degree from the University of Nebraska, an Americanism citation from B’nai B’rith, and a Brotherhood Award from the National Conference of Christians and Jews.

A native of Boulder, Colo., Fr. Reinert and two of his three brothers would join the Society of Jesus. He boarded at and attended Regis High School in Denver. Fr. Reinert earned his M.A. in philosophy from St. Louis University. He later earned a degree in sacred theology from St. Mary’s College (St. Mary’s, Kan.). Fr. Reinert taught at Creighton Preparatory High School in Omaha as a scholastic. His New York Times obituary in 1980 claimed that he “transformed the financially ailing Creighton University into a thriving modern institution.”