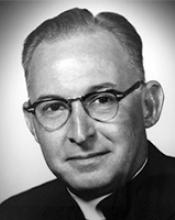 Henry W. Linn, SJ, (1904-1969) came to Creighton University in 1938 to teach Greek and Latin, and served in several other capacities before becoming president in 1962. During his term, six buildings were completed, enrollment increased by 11 percent, faculty grew to 667 and a dozen new degrees were added. Fr. Linn was said to have an “open door policy” for both faculty and students.

In 1963, Fr. Linn launched the New Goals fundraising program, spearheaded by Fr. Carl Reinert, which led to the construction of Swanson Hall, a student center expansion in 1965, Kiewit and Becker Halls the following year, and the Rigge Science Building in 1968. The Dr. C.C. and Mabel Criss Health Science Center (Phase I), dedicated to medical research, was completed in 1963. Criss II, which housed administrative offices as well as classrooms and laboratories for medical students, opened in the fall of 1966 at a cost of $3 million.

Fr. Linn was the director of the Institute of Industrial Relations, a 10-week course open to all working men in Omaha and Creighton students. Subjects included labor history, democracy and labor, and parliamentary law. In 1966, Fr. Linn appointed the first lay vice president of Creighton University, Walter R. Jahn. In 1969, after almost a year of debate and 90 years of tradition, mandatory retreats were abandoned.

One of the most dramatic changes in the school’s administration occurred in 1968 with a restructuring of the Creighton University Board of Directors, the primary policy-making body of the University. It expanded from five members of the Society of Jesus to include laymen and Jesuits, one of whom was to be the president of the University.

Fr. Linn was born in St. Louis in 1904. In 1944, he became Creighton’s dean of the Women’s Division, University College, and Journalism and Graduate Schools. He was later dean of the College of Arts and Sciences. Before being named president, he was executive assistant to the president and vice president in charge of University Relations, and he traveled the nation extensively on behalf of the alumni fundraising program. Fr. Linn was scheduled to retire as president in 1971; however, he died while in office in 1969. Soon after his death, a memorial scholarship, which still exists, was established in his honor.