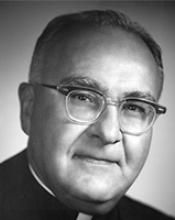 Joseph J. Labaj, SJ, (1921-1985) was the first president elected by the Creighton University Board of Directors, as his predecessors all had been appointed to the office by the Jesuit provincial. Fr. Labaj oversaw one of the most tumultuous periods on campus, as racial tensions and student protests became regular occurrences. The graduate and professional schools were improved, and many new buildings were erected.

Student life at the University transitioned during the more socially conscious era. A Black Cultural Center opened on campus. In response to the Vietnam War, Reserve Officer Training Corps (ROTC) participation fell precipitously. During the 1970-71 academic year, a controversy arose over the cheerleading squad’s response to the national anthem at basketball games. The University disbanded the cheerleading squad until 1973. During the 1972-73 school year, drinking alcohol in the residence halls was approved with the passage of a Nebraska law that set the legal drinking age at 19, and coeducational residence halls were allowed. In 1972, Fr. Labaj denied a request from the students for social activist Jerry Rubin to speak on campus.

In 1971, the Graduate School conferred its first Ph.D. A freestanding College of Nursing was established in 1971 (renamed School of Nursing in 1978). In 1971, the Creighton Omaha Regional Health Care Corporation was established with its own board of directors. In 1973, it purchased St. Joseph Hospital, which remained the University’s teaching hospital. In 1973, the new Boyne School of Dental Medicine opened. The $10.5 million facility allowed the school a 50 percent enrollment increase. The Ahmanson Law Center opened the following year. Also in 1974, Creighton broke ground for the new St. Joseph Hospital. Patients were transferred there in November 1977, and the old hospital remained as the St. Joseph Center for Mental Health. Criss III, completed in 1976, housed the School of Pharmacy. A large donation from Peter Kiewit made the Kiewit Fitness Center possible. The BioMedical Information Center (Health Science Library-Learning Resources Center) opened in 1977, and the University gained a new central utilities system.

In 1976, the Institute for Latin American Concern (ILAC), an Ignatian-led health and educational program, was established at Creighton. Beginning in 1977, health sciences and undergraduate students traveled to the Dominican Republic for eight weeks in the summer to assist rural communities with health care and living conditions.

Fr. Labaj left Marquette University, where he was studying journalism, to join the Society of Jesus. He received an M.A. from St. Louis University in 1952. Fr. Labaj was assistant principal and principal at Marquette High School, and later served in both of those capacities at Creighton Preparatory High School. He was superintendent of Pine Ridge Schools (Holy Rosary Indian Mission) from 1968 to 1970. Fr. Labaj became a provincial of the Wisconsin Province upon his resignation from Creighton University. He died in 1985.