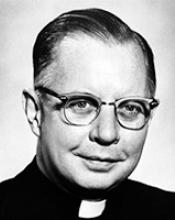 Matthew E. Creighton, SJ, (1927-2018) was the University’s “centennial president,” taking office at the beginning of July 1978. His inauguration was held in November at the Civic Auditorium Music Hall, followed by a banquet. The ceremony took place before 165 delegates from other universities and educational societies, and 144 Creighton faculty members.

Under Fr. Creighton, the endowment grew by $5 million, enrollment increased, faculty research was emphasized and the University became financially stable. In 1979, Creighton University and St. Joseph Hospital launched “Century II,” a five-year development campaign designed to generate $70 million. With the University hitting record enrollment rates (5,420 students), the library facilities were no longer adequate, and other non-capital improvement projects such as faculty, financial aid and endowment were emphasized.

Increased enrollment created a serious housing problem. The Guesthouse Motel near campus was acquired by the University in 1978 and renamed Sheridan Hall. In the fall of 1979, the Palms Tower (now Kenefick Hall) was added as a residence hall. The following year, the University leased with an option to own the New Central Tower apartment building near campus. Even with a large increase in the number of rooms, the housing crisis continued.

In November 1979, the University bestowed its highest civic honor, the Manresa Medal, on Philip M. Klutznick. A friend of Fr. Creighton, Klutznick was honored for his major donation to the Ahmanson Law Center, and for his involvement in the Jewish world community. Klutznick headed the World Jewish Congress, which traveled to the Vatican to meet with Pope John Paul II to encourage understanding between the two faiths.

Fr. Creighton was born in 1927 in Chicago. He was educated at Xavier University, Bellarmine College at Loyola University Chicago and Fordham University. He was a teacher of classics, who wrote books on Greek and Latin, as well as translations and articles. Fr. Creighton was director of Research Services, academic dean of the Rome Center, associate dean of the Graduate School, and head of the Classics Department at Loyola University Chicago. Fr. Creighton served on several academic and civic boards. In 1981, he took a position with the Association of Jesuit Colleges and Universities in Washington, D.C. Fr. Creighton authored several books, including A Summary of the History of Greek and Latin Literature, wrote numerous articles and developed language learning aids.