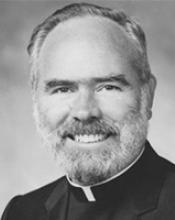 Michael G. Morrison, SJ, (1937-2018) was 44 years old when he became president of Creighton. With a tenure spanning 19 years, Fr. Morrison is the longest-serving president in the University’s history. Nearly 40 percent of all diplomas awarded by the University were signed by Fr. Morrison. He was known for being highly accessible to students, and on pleasant days he sat on the mall in front of St. John’s Church.

In 1982, the School of Pharmacy expanded to become the School of Pharmacy and Allied Health Professions. The reorganized school assumed responsibility for several  undergraduate programs overseen by the School of Medicine. In 1985, a B.S. program in occupational therapy was begun, and in the early 1990s, the nation’s first clinical doctoral program in occupational therapy was instituted. A significant change occurred in 1994, when the pharmacy program converted from undergraduate studies to a doctoral degree program.

In 1984, St. Joseph Hospital was sold to American Medical International Inc. (AMI). In 1995, the University and AMI agreed to Creighton’s purchase of 26 percent ownership in AMI’s assets in Omaha, including the hospital and existing medical practices. On March 1, 1995, AMI was merged with National Medical Enterprises into a new corporation entitled TENET Healthcare Corporation.

In 1984, the newly expanded and renovated library was renamed Carl M. Reinert, SJ Alumni Memorial Library, in honor of the former president.

In 1999, the Legal Clinic was renamed the Milton R. Abrahams Law Clinic, which offered civil, non-fee services to low-income families. The clinic allows third-year law students to gain valuable learning experiences while providing a much-needed service to the community.

The Rev. Michael G. Morrison, SJ Scholarship, an endowed scholarship, was established in 1999 to honor the president upon his retirement. It provided support to needy undergraduate American Indian students with preference given to graduates of Red Cloud Indian School in Pine Ridge, S.D. In 2004, the new soccer stadium was named in his honor.

Fr. Morrison was born in Green Bay, Wis., in 1937. He joined the Society of Jesus in 1955 directly after graduating from high school. He earned degrees of licentiates in philosophy and sacred theology from St. Louis University, and a Ph.D. in history from the University of Wisconsin-Madison. Fr. Morrison would eventually earn five degrees in various disciplines. He was a history and Latin teacher at Creighton Preparatory High School from 1962 to 1966. Fr. Morrison taught at Creighton University during the summer of 1967 and was the Campus Ministry director in 1968. He later served as assistant professor of history and assistant vice president of Academic Affairs at Marquette University. He returned to Creighton University in 1977 to act as vice president of Academic Affairs under his predecessor, Fr. Matthew E. Creighton. He was director of the Institute of Educational Development (IED), which taught English to Japanese students before they entered a course of study at Creighton. Fr. Morrison was honored with awards from the Anti-Defamation League and the National Conference of Christians and Jews.