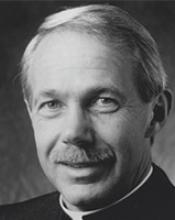 New facilities for administration, student housing, academic programs and athletics were constructed as the campus pushed east toward downtown Omaha. Campus size grew by 40 acres to a total of 130, and enrollment increased 14 percent. Residence life was changed at Creighton with the opening of junior/senior town homes in Davis Square and Opus Hall. Fr. Schlegel dedicated the Creighton University Medical Center as the umbrella organization for all of Creighton’s health care institutions in 2002. The following year, the Hixson-Lied Science Building, which encouraged interdisciplinary collaboration, opened. In 2008, the Mike and Josie Harper Center for Student Life and Learning opened. The Harper Center features a 500-seat auditorium, campus bookstore, fitness center and a ballroom.

Fr. Schlegel was born in Dubuque, Iowa, in 1943. He is a graduate of St. Louis University with a BA in philosophy and classics and an MA in political science.  Fr. Schlegel also earned a theology degree from the University of London and a doctorate from Oxford University (England) in international relations. In early 1976, Fr. Schlegel came to Creighton as an assistant professor of political science. He was soon named to the new position of assistant vice president of Academic Affairs, aiding his eventual predecessor, Fr. Michael G. Morrison. He was academic dean of Rockhurst College (1982-84), dean of Arts and Sciences at Marquette University (1984-88), and executive and academic vice president at John Carroll University in Cleveland, Ohio (1988-1991). Fr. Schlegel served as president of the University of San Francisco from 1991 to 2000. Throughout his career, he has received accolades for his promotion of understanding among all people, and he served on numerous boards and committees. In 2011, Fr. Schlegel was appointed president and publisher of America Press Inc., a Jesuit magazine and website.