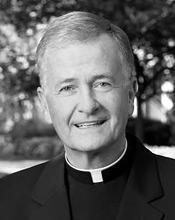 Timothy R. Lannon, SJ, (1950 -  ) served as Creighton University’s 24th president and his term in office was unprecedented in many respects. For the first time in its history, the University was led by one of its own graduates, and, in just over three short years, Fr. Lannon also championed many other milestone achievements.

Under Fr. Lannon’s leadership, the University achieved record enrollment, surpassing more than 8,000 students. Creighton history also was made in 2013 when the University named its first school in honor of Charles and Mary Heider of Omaha. The Heider College of Business was named for the University’s most generous benefactors since the founding Creighton family.

The Ignite the Greatness campaign raised more than $93 million in gifts and pledges to support not only business education, but also the largest renovation of academic areas in the history of the University. Fr. Lannon led this effort, which involved more than 100,000 square feet of space, including relocation of the business college and improvement of six buildings for the College of Arts and Sciences and Student Life.

In March 2013, Fr. Lannon also played a large role in the Creighton affiliation with the BIG EAST, an athletic conference made up of academically respected and largely faith-based institutions. The affiliation enhanced Creighton’s visibility and improved its ability to recruit students in other parts of the country.

Fr. Lannon worked with clinical partner CHI Health, a top 15 health care system in the U.S., to expand a longstanding academic affiliation. Under this strategic partnership, Creighton health sciences students have opportunities for clinical training at an expansive network of community-based clinical sites. In 2014, the University, CHI Health and other community partners announced plans for the Creighton University Medical Center (CUMC) University Campus, which includes a freestanding emergency department and primary and specialty care. Construction began in 2015.

The east campus athletic/fitness/recreation corridor expansion was completed with the opening of the Championship Center in June 2014. Creighton student-athletes use the facility for academic support, athletic training and strength and conditioning services.

Fr. Lannon also oversaw initiation of the provost model at Creighton, designed to create more unified and integrated educational operations. Edward O’Connor, PhD, became Creighton’s first provost in July 2013. The provost is the University’s chief academic officer, responsible for the oversight of the University’s nine schools and colleges, along with Student Life and University Mission and Ministry.

He graduated from Creighton in 1973 with a bachelor’s degree in mathematics, and was president of the Student Board of Governors. Fr. Lannon holds two master’s degrees from Weston Jesuit School of Theology (now Boston College School of Theology and Ministry) and a doctorate from the Graduate School of Education at Harvard University.

A native of Mason City, Iowa, Fr. Lannon entered the Society of Jesus in 1977 and was ordained in 1986 on campus at St. John’s Church. He began his professional career as a Creighton admissions counselor and went on to become an instructor and assistant principal at Marquette University High School, an instructor at Boston College, and an assistant professor at Marquette University. He was president of Creighton Preparatory School from 1988 to 1995.

Fr. Lannon received Creighton University’s College of Arts and Sciences Alumni Merit Award in 1993 and was inducted into Creighton Prep’s Hall of Fame. As an undergraduate, he received Creighton’s highest student honor, the Spirit of Creighton Award, in 1973.

In 2015, Fr. Lannon was appointed formation director for the Chicago-Detroit and Wisconsin provinces of the Society of Jesus.