Ghoussaini, a member of Creighton’s Board since 2016, brings three decades of experience in the automotive industry, and more than a decade of experience in private equity, to his new role as chair.

Beginning his career as a product engineer at Dayco Corporation’s Allen Industries and then at General Motors, he subsequently was recruited by Imperial Chemical Industries’ (ICI) Polyurethanes Division and served as automotive business director for the Americas, overseeing ICI’s activities in the United States, Mexico, and Canada.

He joined Lear Corporation as head of its German business unit in 1995, and was named president of Lear Corporation’s premium car division in 1997. He then spent nine years as president and CEO of Benteler Automotive in Germany. In 2008, Ghoussaini joined European private equity firm Triton Partners as a senior operating partner.

In addition to his degrees from Creighton and Detroit Mercy, Ghoussaini received business training at Harvard Business School, the Wharton School of the University of Pennsylvania, and the London Business School. He has been active in charitable organizations and on corporate boards, including serving as chairman of the materials handling systems company Dematic and automotive supplier Stabilus.

Ghoussaini succeeds Mike McCarthy, a Board member since 2006 and chair since 2015. During his 15 years on the Board and six years as chair, McCarthy has displayed unwavering support and leadership to the Creighton community and to our mission, and I am personally deeply grateful for the many ways he has provided valuable counsel to me as president.

He has been instrumental in seeing Creighton University through many changes and unprecedented expansion. Among other accomplishments, McCarthy played an integral role in facilitating our health sciences growth in Phoenix. The partnerships and the educational opportunities we have developed in Arizona have opened a much brighter future for Creighton, and it is because of McCarthy’s leadership that we can state that Creighton is soon to become the largest Catholic health sciences educator in the United States.

McCarthy also has played a critical role in the restructuring and expansion of our Board; our membership represents an impressive and impassioned range of professional and civic expertise and involvement. In addition, with his guidance and leadership, we crafted the Creighton 150 Strategic Plan: Lighting the Way; completed two successful provost searches; inaugurated the Kingfisher Institute; opened our state-of-the-art School of Dentistry building; navigated the sale of the CHI Health Creighton University Medical Center property at 30th Street and strengthened our partnership with CHI Health; and most recently announced plans for construction of the CL Werner Center for Health Sciences Education.

I would also like to thank outgoing members Ryan Zabrowski, BSBA’01, and Robert “Bob” Greenwood, BSPha’77, for their service to the Board. Zabrowski was president of the National Alumni Board (NAB) at the start of his term in 2015, and was re-elected to a four-year term in 2017, giving Creighton a total of six years of service. Greenwood is the current NAB president and was appointed to the Board in 2019. He will leave the Board with two years of service.

Looking to build on the momentum fostered by McCarthy and our other Board members, I am also announcing the appointment of two Board members to the position of vice chair, Gail Werner-Robertson, BA’84, JD’88, and James Blackledge, MBA’98, and welcoming several new members to the Board. Werner-Robertson joined the Board in 2003 and is president of GWR Wealth Management, which she founded; Blackledge has been a board member since 2017 and is chairman and CEO of Mutual of Omaha. The new members are: 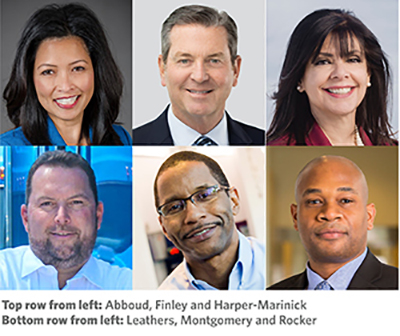 I am particularly pleased that this new group of trustees represents a wonderful mix of diversity. That aligns with my firm commitment, along with our Board, to continue diversifying membership with expertise, geographic representation, gender, and race. Additionally, Patrick Saint-Jean, SJ, PsyD, a member of the Upper Midwest Province of the Society of Jesus and from Haiti, working in the Department of Psychology and Student Counseling, will join the Board as a trustee associate.

I, too, am grateful for the unparalleled commitment of our faculty and staff, and I look forward to working with campus colleagues, new Board members, our new Board chair, and the entire Creighton community as we enter an exciting and important chapter in the University’s history. Together we will embrace a bold vision for our shared future.