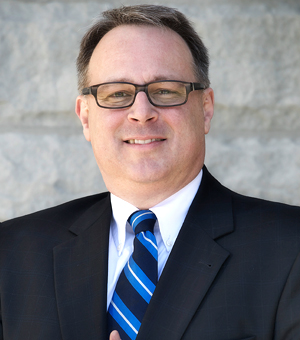 Tim Bastian grew up in an economically depressed, small manufacturing town near Buffalo, NY.  After graduating from high school, he completed an Associate in Science degree in Computer Science at Jamestown Community College.  Looking for greater academic challenges, but coming from a family with limited financial means, he applied for, and was awarded an Air Force ROTC scholarship to Penn State University.

While at Penn State he completed a Bachelor’s degree in Quantitative Business Analysis and earned an officer’s commission into the United States Air Force as a Second Lieutenant.
He served on active duty from 1985 to 1992.  He had assignments in Biloxi, MS and near Boston, MA before competing for, and was subsequently selected for an academic fellowship sponsored by the United States Air Force Academy.  His fellowship assignment was to complete an M.A. degree in Economics at Syracuse University.  Upon completion his next assignment was to join the Economics faculty at the Academy where he taught for two years before his honorable separation from the military.

After the Air Force he spent the next ten years in Pittsburgh and Harrisburg, PA working for several large managed health care and dental insurance companies with increasing levels of responsibility and supervision of staff in operations, finance, and strategic planning functions.

Mr. Bastian joined the Creighton faculty in the now Heider College of Business in 2003, first as an adjunct.  In 2008 he accepted a full-time position as Clinical Instructor of Economics where he teaches classes in microeconomics, macroeconomics, health care economics, introductory finance, and an occasional MBA course.

Tim and his wife Paula have been married for nearly 32 years, have five children and three grandchildren.  Their two sons (Joe & David) are Creighton Heider College alums.  Their youngest, Nina, will be starting her own Creighton career in August 2018.  Their daughter Annie lives on Long Island, NY with her husband and three children.  Their oldest daughter, Samantha, is now known as Sister Francisca of the Immaculate Heart of Mary, as she is a fully professed Discalced Carmelite nun, living in Valparaiso, NE.

Tim is a board member for Mount Michael Benedictine High School in the Omaha area and also serves on the Laboure Society board.  The Laboure Society, a Minnesota-based nonprofit, assists aspirants in eliminating their college student loans which block them from entering Catholic religious life as priests, brothers, sisters, and nuns.