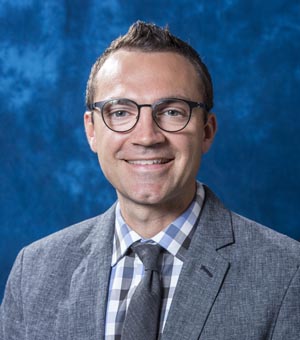 Kevin Estep is Assistant Professor in the Department of Cultural and Social Studies, with primary responsibilities in the Health Administration and Policy (HAP) undergraduate program. He also holds a secondary appointment in Medical Humanities for the School of Medicine. He teaches undergraduate classes on public health, health policy, and healthcare administration.

Kevin joined the Creighton faculty in 2017 after completing his Ph.D in sociology at the University of Notre Dame. Prior to that, he worked in Student Affairs for six years at his alma mater, the University of Oklahoma, where he developed a passion for mentoring and teaching undergraduate students.

His primary research interest is vaccine hesitancy. His recent projects tackle questions such as: Why do vaccine hesitant parents tend to be concentrated in particular communities? And, have positions on childhood vaccine policy become connected to political party? If so, when and how did this shift occur?

His articles have been published in American Sociological Review, American Journal of Sociology, Vaccine, and Sociological Perspectives. He is also co-author (with Rory McVeigh, University of Notre Dame) of the book, "The Politics of Losing: Trump, the Klan, and the Mainstreaming of Resentment."