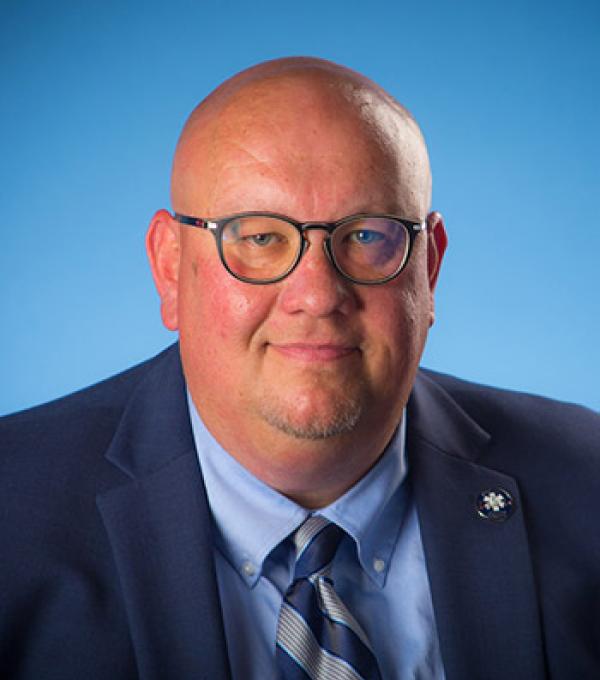 Ryan’s career in Paramedicine started as a volunteer EMT in a small town in Nebraska where he grew up. His career continued to progress and he earned EMT-Intermediate and Paramedic certifications.

Most of Ryan’s experience clinically was emergent response in large urban areas such as Lincoln, Nebraska; Orlando, Florida; and Johnson County, Kansas, a county within the Kansas City metropolitan area. Between time in Orlando and Johnson County, he also worked clinically in surgery in the department of perfusion. In his perfusion role, he worked primarily in trauma, orthopedic, and neurosurgical cases, managing patient blood loss and invasive monitoring lines, including arterial lines, central venous pressure monitoring, and assisting with Swan-Ganz catheter placement and monitoring.

Ryan began teaching in Paramedicine full-time in 2009 at Southeast Community College (SCC) and soon after was promoted to Program Director. As the Program Director, he led the department through two CoAEMSP site visits, beginning with the Letter of Review, through the initial site visit, and on to site visit completion, that resulted in a fully accredited program.  The site visits were completed with a total of a single citation combined in both visits, which was corrected before the departure of the site visitors. During his time at SCC, Ryan led the realignment of the paramedic program that was housed in the non-credit Continuing Education department, to the Division of Health Sciences, with an Associate of Applied Science degree in Paramedicine awarded to graduates of the program. Ryan was also instrumental in realigning the EMT courses from the Continuing Education department to the Division of Health Sciences. The emphasis of the realignment was to progress Paramedic and EMT education from a public service education focus, to a more science-based, health sciences education program.

During his tenure at SCC, Ryan earned a Bachelor of Arts (BA) degree in Leadership from Bellevue University and a Master of Education (MEd) degree in Curriculum and Instruction from Nebraska Wesleyan University.