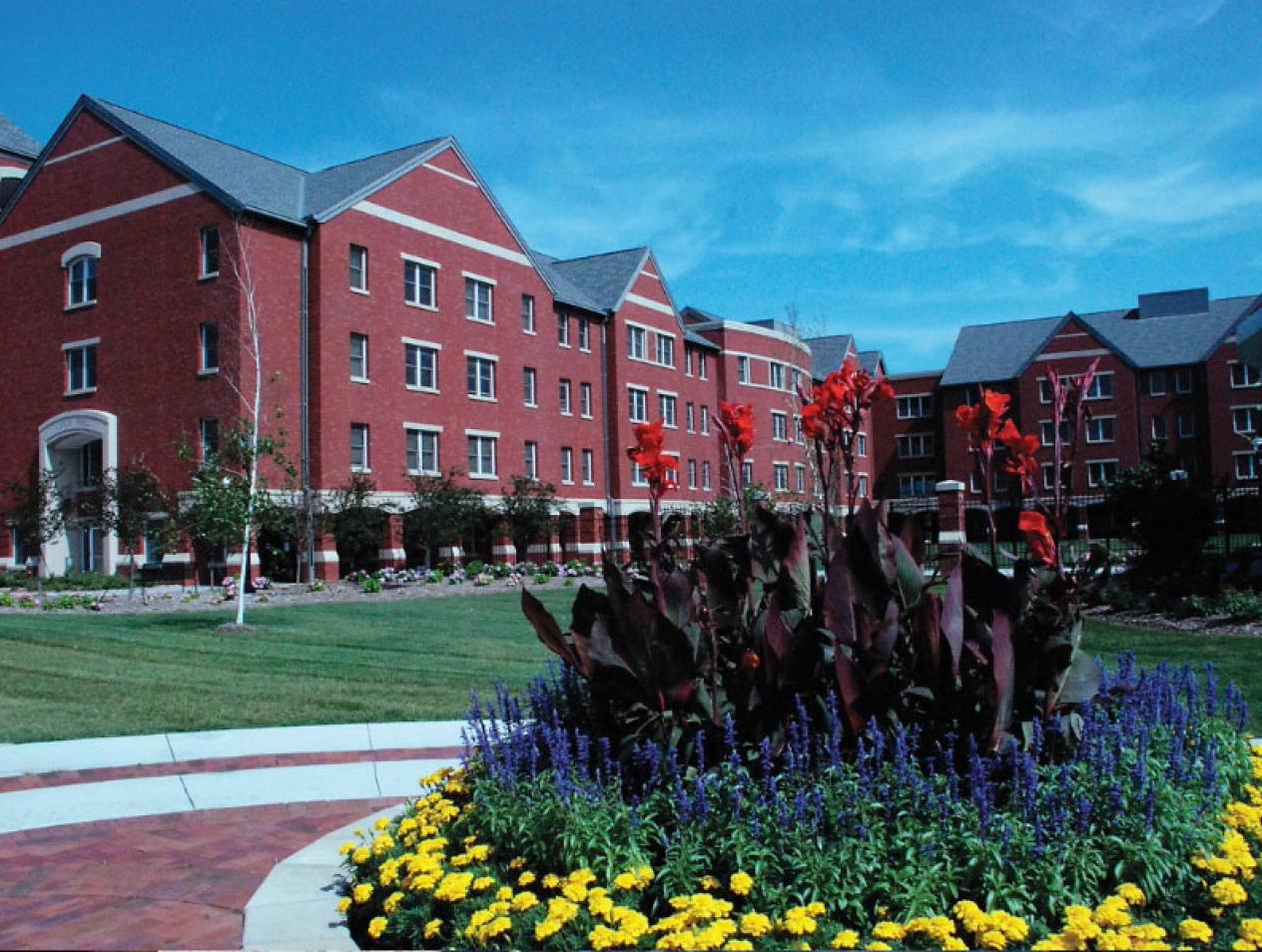 The Feast of St. Francis occurs annually on October 4.

Creighton is dedicated to the pledge which is a commitment "to living out the vision of the encyclical and our Catholic faith through prayer, concrete action, and advocacy."

We encourage you to take the pledge, too! 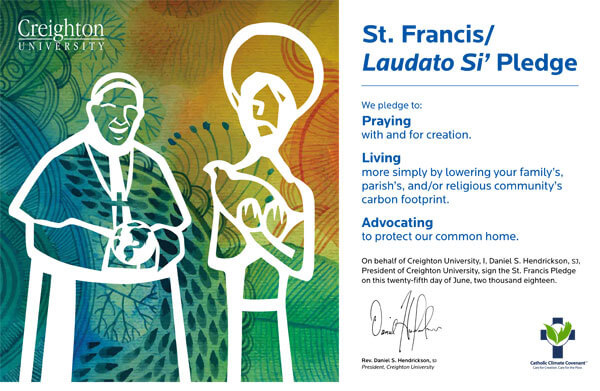 The Spirit of St. Francis Sustainability Award recognizes Creighton University students, faculty, staff, and administrators from across the University who cultivate a culture of caring for creation and positively impact sustainability efforts on campus and in the community. 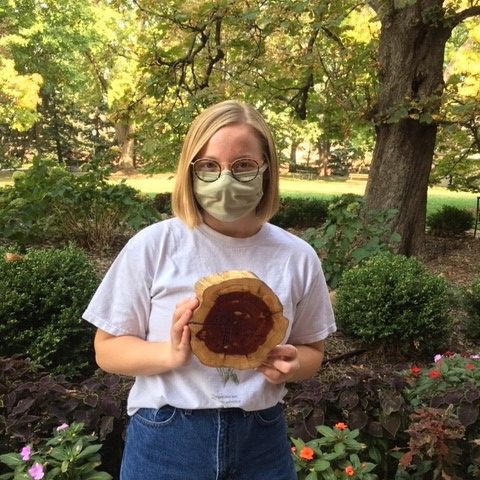 Emily Burke (CCAS '21) is the recipient of the of the Spirit of St. Francis Sustainability Award.

Dr. Adam Sundberg, chair of the FOSF Awards Sub-committee, noted during the presentation of the award that "Awardees are often recognized for some combination of the following contributions: promoting sustainable living and action, inspiring others to do the same, demonstrating and modeling leadership in sustainability and equity, engaging student involvement, creating connections on campus and in the community, and bringing about observable and measurable change to the University. Rarely has one awardee embodied, much less exemplified, all of these goals. Emily Burke is that rare member of the Creighton community."

In one of the many letters of nomination for Emily, one supporter stated "there is no better way to describe Emily Burke than as the true manifestation of a servant leader." 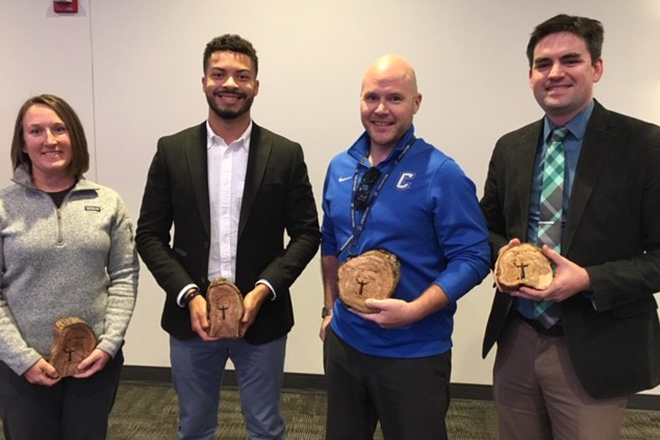 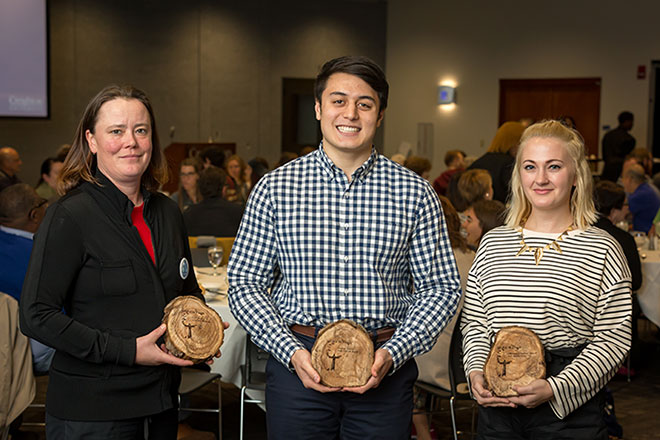 Patrick Marta, CSU President, Class of 2019
The 2018 Spirit of St. Francis Student Award was presented to Patrick Marta. Patrick received multiple nominations for his work, and each nomination highlighted his enthusiastic and collaborative commitment to sustainability at Creighton over the past year. They noted that "Patrick is a true leader and demonstrates the Jesuit Charism of being a contemplative in action." Patrick has been a vocal promoter of three sustainability initiatives on campus including (1) eliminating plastic bags on campus, (2) eliminating plastic straws as the default option on campus, and (3) establishing a Green Fee/Fund.

Jess Benjamin, Adjunct Assistant Professor, Fine and Performing Arts
Jess Benjamin was awarded the 2018 Spirit of St. Francis Faculty/Staff Award for her work on Metamorphosis, the Sayaka Ganz Reclaimed Plastic exhibit. As director of Creighton's Lied Art Gallery, Jess brought together Creighton students, faculty, staff, and alumni, as well as members of the Omaha Community to produce a high profile and deeply impactful exhibit by artist Sayaka Ganz. This project combined reclaimed plastic sculpture with education and advocacy for sustainable consumption practices. It also had a secondary lasting legacy; the Ganz exhibit incentivized recycling among Creighton faculty in the Fine and Performing Arts and prompted public demand at Lauritzen Gardens for recycling bins. The important and broad educational impact of the Ganz exhibit was due, in no small part, to Jess's commitment to sustainability education and her creative vision for how to engage the Creighton community.

Dasha Sudar, Coordinator for Adult Learners, Educational Opportunity Center
Dasha Sudar was presented with the 2018 Spirit of St. Francis Community Partner Award for her work at Creighton University's Education Opportunity Center. Dasha has demonstrated exemplary leadership in holistically advancing sustainability goals for the EOC. These include the establishment of a speaker series that brought community sustainability leaders to campus to build partnerships with first generation and low-income adult participants. Dasha established a community garden in collaboration with Big Muddy Urban Farm. This project is ongoing and continues to provide fresh produce to participants in the local community. In the words of her nominator, "Dasha is passionate about sustainability and has worked hard to create opportunities to integrate campus partners as well as those in the community into her plans."

Notes from Dr. Ryan Wishart, chair of the Awards Committee, emcee of the awards ceremony, and Assistant Professor of Cultural and Social Studies:

Dr. Richard Miller, Associate Professor of Theology
Dr. Miller was awarded the Faculty/Staff Award in honor of his active role in scholarship and advocacy at Creighton and many levels of government over the last decade. Over the past year Dr. Miller played an active role in the Presidential Advisory Committee on Sustainability that produced great fruits including the formation of an Office of Sustainability and Creighton's first full-time Sustainability Coordinator.

Jessica Mizaur, Class of 2018
Ms. Mizaur was awarded the Student Award for her work as the communications director for the Greenjays student group, where she helped to organize letter writing campaigns against the KXL pipeline and Earth Week's Green Chat booth. Ms. Mizaur volunteers with political campaigns of candidates working to increase sustainability as a priority at OPPD and the mayor's office. She currently serves as the president of Greenjays.

Dr. Barbara Dilly, Associate Professor of Cultural and Social Studies
Dr. Dilly was presented with the Community Partner Award. Four years ago, Dr. Dilly developed a community garden on one of Creighton's vacant lots in the Gifford Park Neighborhood on the corner of 32nd and Webster Streets in collaboration of the Gifford Park Neighborhood Association and the Refugee Empowerment Center. The garden was designed to further the neighborhood association goals of welcoming and integrating refugees into the Gifford Park community. The garden became a field site for qualitative methods students creating further relationships between our campus and the community there and other community organization linked to gardens, food, and vulnerable populations. After the University decided this year to sell the garden this year, Dr. Dilly has risen to the challenge to work with Creighton to replace the environmental, social projection, and learning outcomes around sustainability and justice in a new location.

Kelly Tadeo Orbik, Associate Director of The Schlegel Center for Service and Justice
Ms. Tadeo Orbik was honored with the Distinguished Career Award. Her career includes critical contributions to keeping the St. Francis celebration going over the years by providing vital behind-the-scenes work that doesn't always get the same limelight as other forms of contribution. By providing student volunteers and resources, she helps make the annual event not only fun, but as green as possible. Her nomination spoke clearly of the impact her personal choices in life as well as advocacy to others, raising awareness on campus of the intersection between justice and sustainability.

From the nomination letter:

"Together, these two have done quite a bit to make Creighton, and Purchasing in particular, more sustainable. Each one has supported the other and they have done so much together that it is impossible to separate the two.

"Ed was on the forefront of sustainability at Creighton, bringing recycling to campus in the mid-1990s, long before sustainability was seen as important. He was an inaugural member of the Energy Awareness Committee, starting in 2000 and remaining a steadfast member until the dissolution of the committee, when it folded into the Sustainability Council. From that time, he has been a member of the Council.

"As long as Joe has been at Creighton, he has been a member of the Sustainability council, offering insights and working on various projects to further sustainability. Further, he has provided data for the university’s greenhouse gas emissions inventory and Sustainability Tracking, Assessment, and Rating System (STARS).

"Neither one of these men does this for the glory; they do it because to them, it’s the right thing to do and it’s a way they can make positive change for the university as a daily part of their job. They are extremely deserving of the Spirit of St. Francis Award, as they have acted to make Creighton more sustainable."

Notes from Scott Williams, emcee of the awards ceremony and Resident Assistant Professor in the Energy Technology program.

Jay Leighter, Associate Professor of Communication Studies.
The nomination spoke to both his personal and professional commitment to sustainability as an advocate and in his teaching and research. In addition the sustainability related courses he has developed for existing programs, a major accomplishment completed last year was the successful creation of a new Major/Minor program in Sustainability—an undertaking requiring nearly 3 years of work and dedication. In the words of his nominators: "His lifestyle, commitment, scholarship, and teaching make him a role model for sustainable living.”

Jessica Sheldon, Class of 2016.
Jessica has been involved for years in the universities Climate Action Plan as a work study and played a role in sustainability advocacy through GreenJays. Of special significance in the past year was the leadership role she played in taking over the organization of earth week activities following the disbanding of the Energy Awareness committee.

Andy Waltke, Biology Lab Coordinator; Community Partner Award.
Andy, in addition to proving education opportunities for our own students in his role as Green House coordinator, has also been a valuable partner to many community organizations addressing food needs of the poor and vulnerable in Omaha. For instance, City Sprouts has recognized him as a critical community partner. Quoting his nomination "By creating collaborations and connections within and around the Creighton community, Andy is widely recognized in the city of Omaha as a promoter of sustainable change, which brings recognition to the university as well."

Mary Duda, Sustainability Coordinator; Lifetime Achievement Award.
Mary was nominated as a result of her leadership in prayer and reflection, organization, and advocacy. As the committee described, “Mary has been in it for the long haul”. She has been instrumental in the development and implementation of the Campus Climate Action Plan. Additionally, Mary serves as the leader of the Sustainability Council, a duty she has performed for nearly 6 years. The committee saw it quite appropriate to recognize the appreciation Creighton owes to Mary in laying the groundwork for so much of the great work going on today.

Michael Cherney, Professor of Physics. Mike was nominated by several people for his exemplary work in developing the Energy Technology program.

"Most importantly, Dr. Cherney has played a very important role is inspiring me to live out my values and faith in my teaching of environmental sustainability and social equity. He showed me how it can be done!"

"Mike is pretty much the embodiment of the award criterion: “Encouraging or engaging student involvement in sustainable research, events, and projects”. Students in the Energy Technology program have a unique project-oriented curriculum, and as part of their coursework have developed a number of sustainable installations on campus (lighting, solar heating, etc.). Energy Technology students have also been involved in outreach activities and internships in the community. "