Tucked into the corner of the fourth floor NCAA room filled with College World Series (CWS) officials sat a pair of Creighton students, each manning two computers whizzing as fast as the pitches they were analyzing. Their jobs: to provide advanced metrics to the NCAA, run a live Twitter feed, create graphics for each team and scout the top pitchers to better analyze their pitches.

The students are part of CBAT, or Creighton Baseball Analytics Team. It was founded in 2019 by Heider College of Business student Ryan Wolak and then-Creighton pitching coach Eric Wordekemper and grew into new organization when Heider College economics instructor, Tim Bastian, MBA, approached Rourke Jensen about the new program. Jensen, an accounting and economics double major and theology minor from Lincoln, quickly joined the party. CBAT was born.

CBAT is intended for all Creighton students – not just those enrolled in the Heider College of Business – who want to work in sports after graduation. The team "is providing them with professional experience unlike any other in the sports/data world," says Jensen.

In addition to Jensen, CBAT is under the leadership of faculty moderators Bastian and Kate Sheehan, PhD, associate professor of economics; director emeritus Wolak; and coaching liaison Connor Gandossy, hitting coach and recruiting coordinator for the Creighton Men's Baseball program. 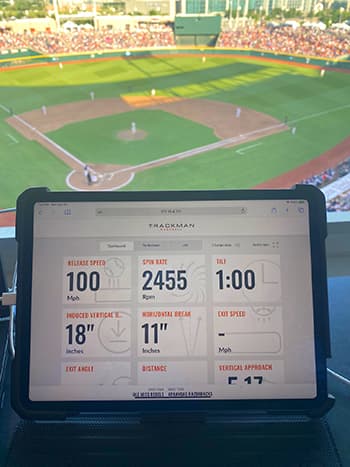 CBAT is completely student-led and responsible for data collection, management, analysis and reporting for Creighton baseball's Rapsodo and Trackman programs, which track sports performance. Since its inception, 21 students have assisted Bluejay coaches with team analytics.

And this summer, the NCAA enlisted CBAT's help to assist reporting of the 2022 College World Series.

"Our program started with one guy and a notebook at Creighton games. Three years later, we have a team of 15 being asked to work the (College) World Series," says senior Jensen, student director of CBAT.

CWS coverage involved multiple moving parts. Eight CBAT team members worked two-person volunteer shifts throughout the series, some taking vacation time from out-of-town internships to pitch in. Caleb Hauser came in from Milwaukee, Cam Kresko from Minnesota and Aidan Herguth from Chicago. Trevor Ordway worked at Gallup by day and Charles Schwab Park at night, as did Pete Rudnick from Nebraska Medicine. Wolak filled in for four weekend games. Diego Dominguez took time off from his Illinois internship and Jack Marasco from his in Kansas City. Jensen kept tabs on all the activity from his internship in Washington, D.C.

A home run on social media 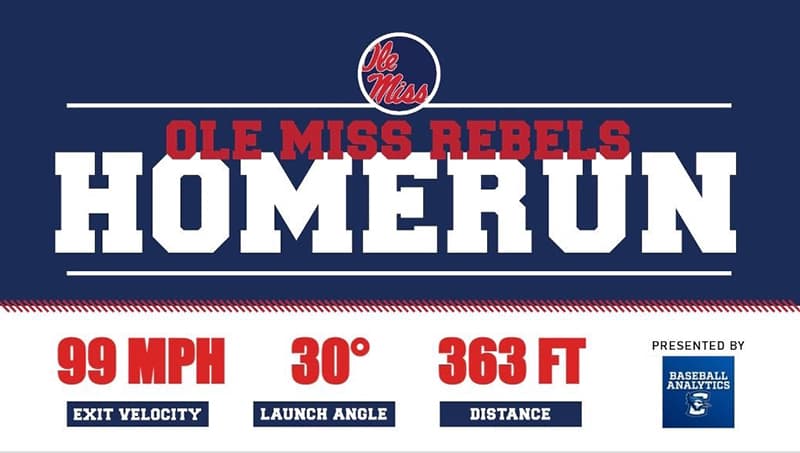 Surprisingly, the CWS did not track analytics last year. CBAT's participation this summer was not only a coup for Creighton but groundbreaking for the CWS.

The NCAA social media team was not as familiar with Trackman's complicated advanced metrics as CBAT members, thus giving rise to the partnership. The program's exposure exploded. Followers on Twitter doubled within the first week of the CWS. Rudnick attributes this to the fact that the students were responsible for sharing interesting CWS team stats with the public.

"Seeing our tweets get attention from the fans was really cool, as it signified the growing reach of our program," Rudnick, a senior chemistry and medical mathematics double major and biological physics minor from Plymouth, Minnesota, says. "Obviously, being in the booth for the games and spending time around people working in sports was great, but it was more rewarding to see how far our group has come."

"The most challenging part of the job was determining what information was really important and what was most worth sharing," Rudnick continues. "The most rewarding part was seeing the public reaction on Twitter to the stats we found and the graphics we made. Seeing the love on the tweets made all the time spent on analytics even more worth it."

Preparation, as well as practice, makes perfect. In fact, Jensen believes the hours of prep the students conducted prior to the series opening – creating unique graphics for each team, scouting their pitchers, scheduling games, generating interest by reaching out to connections – resulted in CBAT's success.

"What may look like a spur of the moment tweet, in reality, has hours of work behind it. No matter the profession or objective, success comes from those who prepare," he says.

And did the two have a favorite team, one for which each was secretly rooting? Rudnick is a fan of pitching, so whoever was pitching throughout each game had his support. As for Jensen, an Irish-Catholic, it's got to be Notre Dame – but with one caveat, he says: "As long as Creighton is not involved."