Olson and Idra: Mentoring a Mentor

Jacob Idra is juggling quite a few balls. It’s a good thing he is agile. 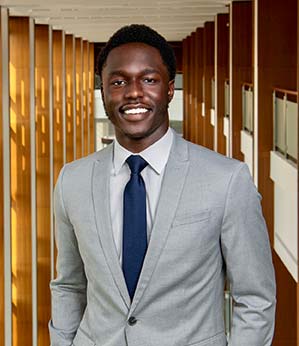 The senior from Omaha manages full-time student status with a full-time job, the founding of a nonprofit, an internship and multiple extra-curricular activities.

“It’s not easy, but nothing great comes easy,” he says. “I feel strongly about all the activities I am involved in. So, although it’s challenging, it’s also gratifying to know that every day, after a full day of work, I am fulfilling God’s purpose for me.”

Idra is a senior pursuing the financial services and consulting track of a finance major. He enjoyed his high school personal finance class but thought a single course for such an important topic was insufficient. With Keith Olson, DBA, CFA, assistant professor of practice in the Department of Economics and Finance, as his academic advisor, Idra’s exposure to finance grew, and he decided finance aligned not only with his personal goals but his professional ones as well.

“When I connected with Dr. O., he affirmed and encouraged my vision and ideas. Having an advisor who fully supports you can be a real x-factor for a college student. I know it was for me,” Idra says.

But Olson is more than Idra’s advisor; he is his mentor as well.

Idra first met Olson through Tim Bastian, MS, economics instructor at the Heider College of Business. Knowing that Idra was discerning a major, and familiar with his background, Bastian thought Idra should talk to Olson, who shares a global perspective and entrepreneurial spirit with the Heider student.

“We clicked immediately,” Idra recalls of their two-hour meeting in the Heider Securities Investment and Analysis Center.

During their conversation, Olson asked Idra a straightforward but important question: What do you want? Idra’s response: Guidance on how to pull all his interests together in the short term to align with his long-term goals of assisting others to become financially independent.

One of these interests is his nonprofit, Republic of South Sudan (ROSS) Leaders, which he established in 2019. The organization cultivates community through education, mentorship and cultural identity for immigrants new to Omaha and children of immigrants from South Sudan and other African nations.

Idra, who is originally from South Sudan himself, says he and his fellow founders decided to focus on inner-city youth because, as mentors, they understand what it is like to be a Black boy or girl in the U.S. They understand the challenges, and – more importantly, Idra contends – they recognize the raw potential and importance of cultivating talent in the ROSS leaders.

“We also feel strongly about our younger brothers and sisters keeping their South Sudanese identity,” Idra says. “It is easy to lose your identity in America, and we don’t want that narrative for our generation.”

Idra says Olson, whom he calls a “big thinker,” has helped him strategize to make ROSS sustainable long-term, to think beyond the day-to-day needs of tutoring someone in math or history to fortify the organization to keep it operational beyond Idra’s time as executive director.

“Dr. O. helped me see the difference between working on the nonprofit versus working in it,” he says. 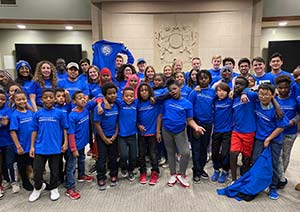 Idra also works to advance opportunities for minorities and lower-income individuals as Nebraska’s representative at American Federation for Children, a nonprofit that empowers families, especially those from challenged socioeconomic backgrounds, with the freedom to choose the best K-12 education for their children.

In addition to serving as dean for the sophomore class at Mount Michael Benedictine School in Elkhorn, Nebraska, his alma mater, Idra has also worked with Howard Kennedy Elementary School students through Creighton University President’s Scholars (CUPS), a mentoring program he helped found as a sophomore (he also served as its president), that pairs Creighton students with students in North Omaha. He encourages more engagement and community-building between his University and childhood neighborhood. Black students make up a mere 2% of Creighton’s student body, and he sees CUPS as an opportunity for the University to retain students from its northern neighbor.

In fact, race and what it feels like to be a minority are topics that resonated on a personal level with both Olson and Idra, further connecting the two. This may be bewildering. Olson is, after all, a middle-age white male from the American Midwest, not exactly the demographic one associates with minority status. But the number of years he spent living and working abroad gave him an appreciation for thinking differently than his contemporaries.

“Following our initial conversation, Dr. O. encouraged me to overcome diversity roadblocks I was facing as a student at Creighton and in other professional positions,” says Idra.

Olson says the conversations he and Idra have shared have been “uncomfortable” and “very raw, very direct,” but the two have focused on how to “turn raw emotions into productive conversations.”

“Although I don’t understand fully Jacob’s experience as a Black student at a predominantly white university, I can still acknowledge the experience and help him form a plan” to address the challenges that result, says Olson.

“Too many times, organizations use diversity and inclusion to better market their brand instead of making sustainable institutional changes,” says Idra. “In sharing our common experiences as minorities, Dr. O. in his global initiatives and my experience as a minority at Creighton and beyond, our relationship grew beyond the academic realm. We were able to work with others and overcome the organizational bureaucracies that exist to arrive at attainable solutions.”

“It’s a long road, but I think more people are willing to get into the car and go on the ride,” he adds.

“Once you build a relationship with a professor, having a class with him or her is so much more engaging,” Idra says.

From Professor to Advisor to Mentor

Idra says all his exposure to nonprofit work plus his relationship with Olson have taught him to “work with people, not manage people.” He hopes to shift individuals’ perspective from a community service mindset to a community engagement one, as represented in the Jesuit value of being men and women for and with people.

He says many people assume he is studying social work and are surprised when he tells them he is a finance major. But for Idra, finance is a form of social work. He is glad he went the business route and met Olson.

“Now I have a basic understanding of what it takes to operate a business that’s tied to a social cause,” he says, which will help him with good financial decisions on future endeavors.

Idra encourages others to take the time to connect with their professors outside the academic classroom, as he did with Olson. It is a friendship that will last long past graduation.

Guess you could say it’s one for the books.