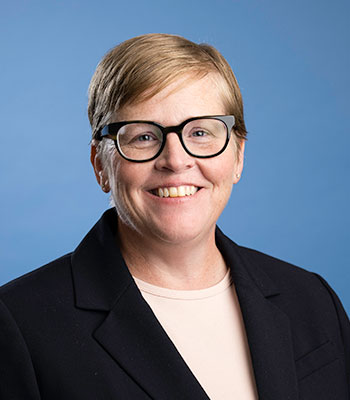 Joy M. Suder has been practicing law in Nebraska since 2008, first as a public defender in Douglas County, then in private practice, and now as the Director of the Juvenile Justice Legal Clinic at Creighton University School of Law. Joy is a Special Appointed Magistrate for the Winnebago Tribe of Nebraska and has also served as Judge Pro-temporare for the Ponca Tribe of Nebraska.

Joy is a certified trainer from the Gault Center (formerly National Juvenile Defender Center) in best practices for defense counsel for youth. She has been invited to train attorneys and stakeholders both locally and nationally, and currently serves on the Gault Center’s National Advisory Board as well as a Co-regional Director for the North Central Region of the United States.

In Douglas County, Joy serves on the Juvenile Detention Alternatives Initiative (JDAI) as co-chair of the data subcommittee and on the advisory board  for the Juvenile Justice Certificate Program at the University of Nebraska-Omaha  Juvenile Justice Institute and School of Criminology and Criminal Justice. On the state level, Joy is a member of the Nebraska State Bar Association (NSBA), is an elected representative to the NSBA House of Delegates, and is the Chair of the Juvenile Law Section of the NSBA.

Joy lives in Omaha with her husband and sons, yelling the loudest from the sidelines at their various sporting and artistic endeavors.