It is with a deep sense of gratitude for her leadership, collaboration, and decades of service to Creighton University that I announce today that Eileen Burke-Sullivan, STD, has shared with me her decision to retire from her role as vice president of Mission and Ministry effective July 1, or until a permanent successor is named.

Dr. Burke-Sullivan has played an instrumental role in sharing, furthering, and championing Creighton’s Jesuit, Catholic mission and values, both internally and externally. 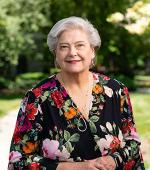 In 2014, she was named vice provost of Mission and Ministry. In August 2021, I shifted the position to a vice president role, with direct reporting to me. I am personally grateful for her valuable consultation and insightful commentary as a member of the President’s Cabinet and President’s Council.

Dr. Burke-Sullivan is an accomplished theologian, spiritual director, liturgist, and musician. A well-known lecturer, she has served as a lay ecclesial minister in both parish and diocesan settings, and as a national and international leader in the Ignatian-inspired Christian Life Community movement.

In her role with Mission and Ministry, she led the development of a multitiered curriculum for faculty, staff, and administrators for formation in Jesuit, Catholic identity and values; has served as a connection point with the Omaha Archdiocese; and has provided spiritual direction and given retreats for religious and laity, both on and off campus. She also has continued to teach and direct the online Master of Arts in Ministry Program.

Under her leadership, Creighton instituted its first Mission Week in 2019, with New York Times bestselling author and founder of Homeboy Industries the Rev. Greg Boyle, SJ, giving the inaugural keynote address. She also created a nationally recognized Certificate in Ignatian Tradition program, collaborating with Regis University in Denver. The program includes two graduate courses in the Spiritual Exercises and the history of the Ignatian tradition, and a prayer pilgrimage to Ignatian sites in northern Spain, Rome, and Paris.

In 2011, Dr. Burke-Sullivan, as associate professor of theology, was named the Barbara Reardon Heaney Chair in Pastoral Liturgical Theology. For the four years following (2012-2016), she led a major effort to celebrate the 50th anniversary of the Second Vatican Council by sponsoring a series of presentations by internationally known theologians and historians, developing student research grants in the council’s work, and creating meaningful events for Omaha Catholic churches to renew congregants’ knowledge and love of the council. Dr. Burke-Sullivan has continued to speak around the country on the various council documents.

I have also asked Dr. Burke-Sullivan to chair the committee leading the University’s Second Mission Priority Examen (MPE) self-study, an initiative of the Society of Jesus. The MPE is an opportunity to reaffirm our Jesuit, Catholic identity; engage in institutional reflection on our mission; and identify how we can more fully live out those priorities throughout the University. Dr. Burke-Sullivan chaired the first report six years ago, which was well received by Father General Arturo Sosa, SJ.

Dr. Burke-Sullivan plans to continue teaching in the graduate programs, directing retreats, and offering spiritual direction. She also has agreed to stay on to assist my office as a special advisor on mission, for which I am most grateful. I am eager to work with her on upcoming events at the University around mission that have yet to be determined.

Please join me in thanking Dr. Burke-Sullivan for her service as vice president of Mission and Ministry. We will look for ways to celebrate her accomplished tenure and will announce those plans to campus when they are finalized.