In Los Cerezos, Dominican Republic, located near the Haitian border, JJ Koval and Johnny Haller completed two weeks worth of extractions, cleanings and fillings at a makeshift dental clinic set up in the local school. In three other campos across the DR, six more senior Creighton dental students were doing the same.

From there, teams of two dental students, a local Dominican dentist and a Creighton faculty member set off to four campos — Aminilla, Arroyo Berraco, Cadillar and Los Cerezos — around the country to provide rural residents with dental care. The clinics were set up in local schools with various stations for medical, dental and pharmacy services.

“With the use of generators, compressors, dental instruments and headlights, the dental clinic was able to provide extractions, fillings, sealants and cleanings to the Dominican community,” Tran says.

Working from 8 a.m. to 4 p.m., the student dentists saw anywhere from eight to 15 patients, depending on the cases they were working on, serving every age population.

Haller and Koval served several patients from Haiti and other nearby campos who had traveled multiple hours to the clinic specifically for dental care.

"We had a woman who came in after traveling for two days to get to the clinic,” Koval says. “She ended up being there for three hours and we did as much as we could for her. It really puts things into perspective — treating people that actually really, really need it.”

Most people living in rural campos do not have access to dental care and traveling to a nearby city can be costly, meaning the communities can go for extended periods of time without care at all.

“It felt really meaningful being there to provide care,” Haller says, “but it was also heartbreaking to see what they needed and know they didn’t have that access.”

“There was only so much time and so many people,” Haller says. “You wished you could do all of the things they needed but we had to focus on the most urgent things. That was definitely a challenge — limited resources and limited time.”

While most of the procedures were fillings and extractions, there were a few special cases.

“A kid came into the clinic tongue-tied, and with the help of Dr. Kelly, we were able to do a frenectomy so he could swallow and talk better,” Fink says.

The impact of their work was strengthened by the community immersion.

Due to the COVID-19 pandemic, the students were unable to stay with host families in the campos. Instead, local families offered up their houses for the students to stay in to limit exposure risks. But that did not prevent them from developing strong relationships with the community members.

“What was so unique about this experience was the full immersion aspect,” says Tran, who was staying in Cadillar. “We were living in the countryside and partaking in all the community events with the locals. I felt as though I really got to know the community and its members.”

Koval and Haller spent their limited free time playing baseball and basketball with the local children.

In Arroyo Berraco, Fink and Gores were assisted by local girls and young women from the community called ayudantes, or helpers.

“This one girl, Scarlett, probably around age 14, she loved assisting me, and I loved having her help,” Fink says. “After the two weeks were up, she gave me a hug and thanked me for inspiring her. She said she had never seen a female dentist before, but she wanted to be a dentist too.”

In the broken Spanish Fink had learned, she told the ayudante that she could do it, all she has to do is believe in herself.

“It felt like we were there to get to know people in the community, and each other, rather than just to work,” Haller says.

In fact, the seniors agreed, the most fulfilling part of the trip was seeing the joy their service brought to the community.

“I had a patient that had quite a few cavities on her lower front teeth that were very dark and misshapen,” Terry says. “I was able to remove the cavities and put tooth-colored fillings into all four teeth, and she was ecstatic with the result.”

Terry handed the patient a mirror when he was done, and the patient cried tears of joy over the results. “This experience made me appreciate how much a simple filling or extraction can mean to someone who doesn't have regular access to dental care,” Terry says.

“To fix someone’s front teeth and see how excited they were to smile again was so incredible,” Haller says.

“The patients’ smiles were often a lot bigger when they left our clinic,” Terry says. 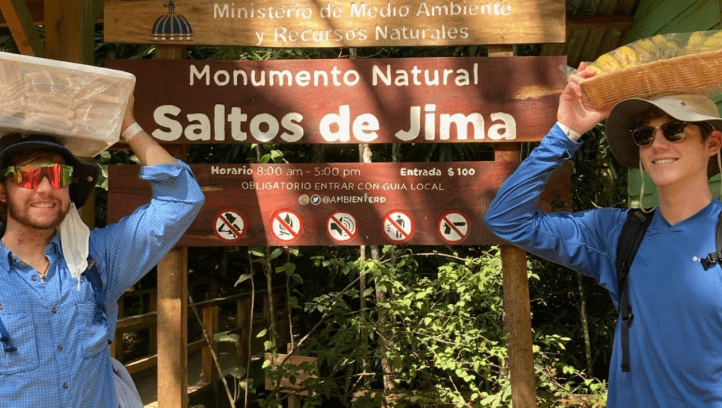 Nick Zeh’s service-learning semester in the Dominican Republic proved life changing, much like the more than 5,000 Creighton students who preceded him.
Close Sidebar