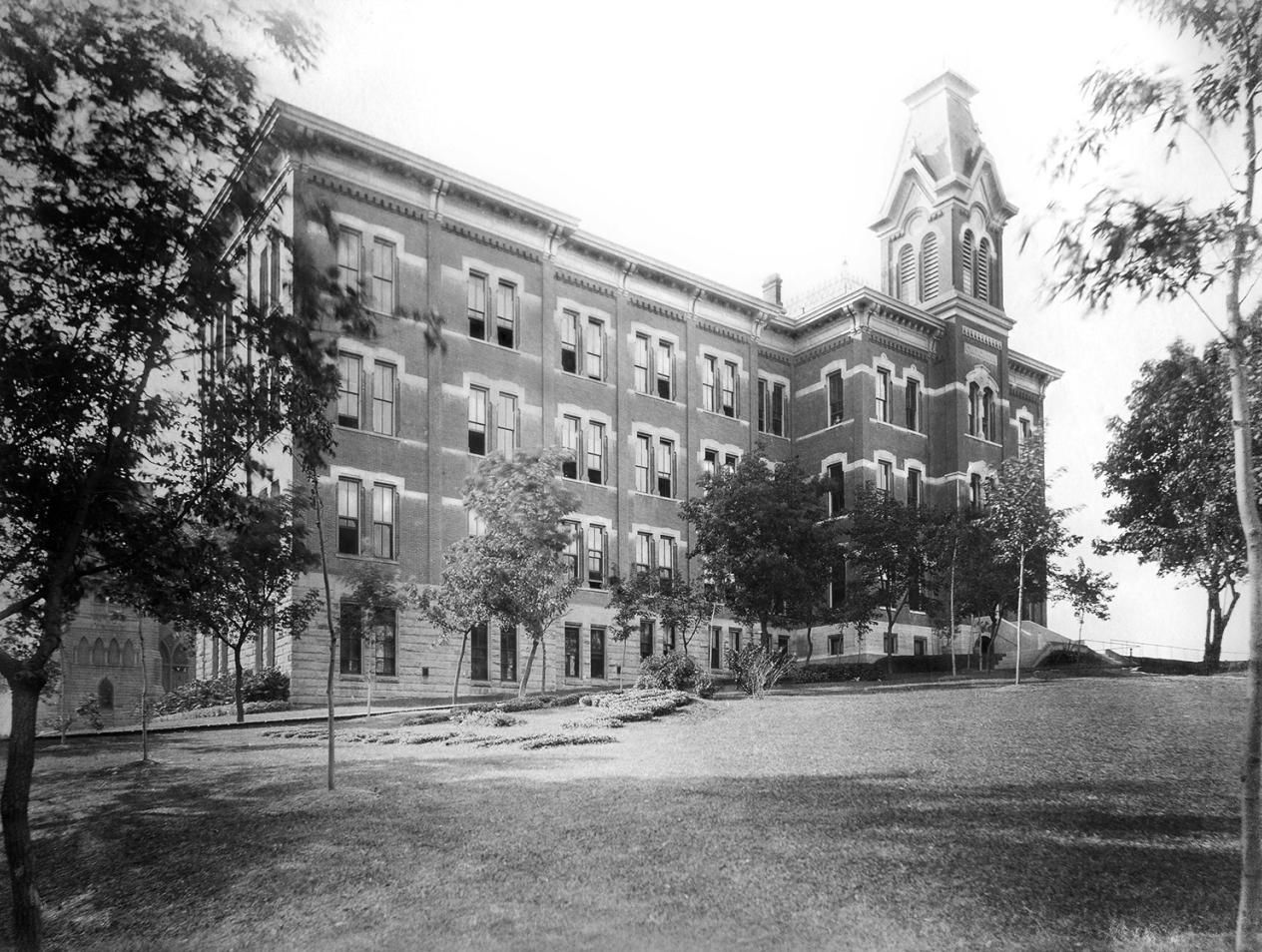 The Creighton University Archives collects, maintains and provides access to collections that appeal to a variety of researchers: archival holdings related to the history of Creighton University; rare books and other valuable print materials; and special collections from literature, health, art, religion and other fields. Digital surrogates of selected files are available for viewing on the Creighton Digital Repository. See the links below to access featured collections directly. 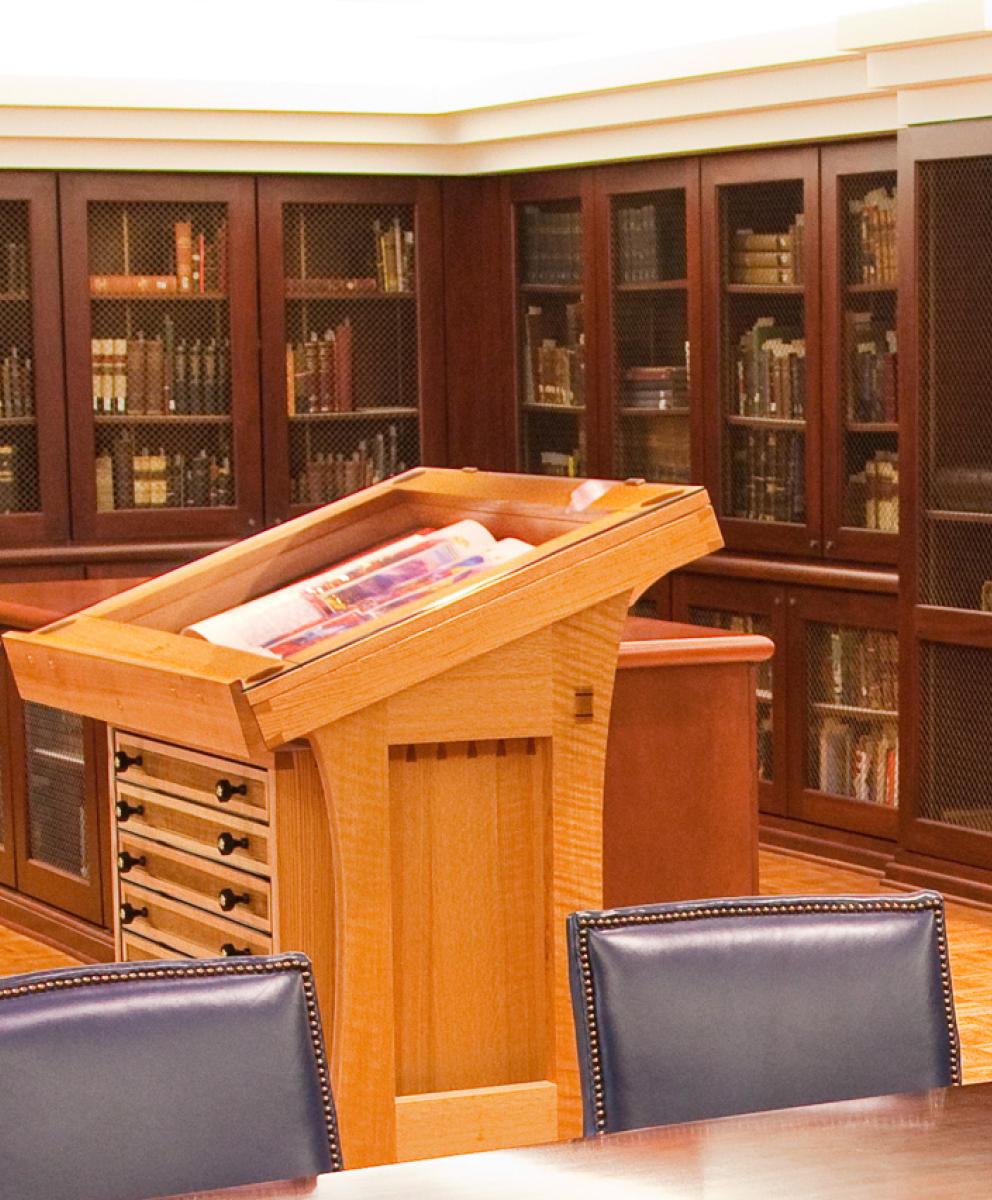 Omaha Area History and Miscellany
This collection contains items about events, people, places and more in Eastern Nebraska and Western Iowa, with Omaha - Council Bluffs as the primary geographical focus.

St. John's Church
Collection of documents and items related to the St. John’s Church, located on the Creighton Campus

William F. Rigge
Collection of materials related to Fr. Rigge, who was assigned to Creighton in 1896 and had a distinguished career as a teacher and scientist. His research, much of which involved the Creighton Observatory, was published widely and earned him local and international recognition.

Special Collections encompasses thematic collections not specifically related to the history of Creighton University. Some special collections include historical tools and equipment from the fields of medicine, pharmacy, and dentistry; fables literature and memorabilia; religious realia; and artwork from several continents. Some collections are available for viewing online, and most are on display at either the Health Sciences Library or the Reinert-Alumni Memorial Library on the campus of Creighton University. We hope to have a more comprehensive list of our Special Collections online soon.

The Creightonian
The first issue of the Creightonian came off the press in October 1922. The weekly student newspaper soon supplanted the Creighton Courier as the primary source of campus news. Today, the student-run Creightonian publishes a weekly print edition as well as an online version during the academic year.

Chronicles & Shadows
Originally begun in 1909 as The Creighton Chronicle, the publication known today as Shadows has been a publication with many purposes. It served as the Creighton University news source until the emergence of the Creighton Courier newspaper in 1912.

The Bluejay (Creighton Yearbook)
Creighton University's yearbook, the Bluejay, was published from 1924 through 1941. Publication stopped during World War II and did not resume immediately following the war owing to a lack of student interest. The Bluejay returned in 1949 and was issued each year until 2011, the last year Creighton produced yearbooks.

We at Creighton are fortunate to have a Heritage Edition of The Saint John's Bible* on campus thanks to Mike and Nancy McCarthy, who have kindly gifted their set to the Creighton community. The Heritage Edition, when not in use for events around campus, is available for viewing in the Rare Books Room on the main level of Reinert-Alumni Memorial Library. Creighton classes, departments, organizations and alumni, as well as groups from outside of Creighton, have visited the Rare Books Room to engage with the sacred art and text.

*We offer a brief introduction for those who are unfamiliar with The Saint John's Bible or the Heritage Edition program. Contact Campus Ministry for more information.

The Saint John's Bible is the first handwritten, hand-illuminated Bible produced in English in over 500 years. Although the techniques for producing The Saint John's Bible, making quills to apply hand-mixed inks to calfskin vellum, are similar to those used by monks centuries ago, this is a 21st-century Bible that includes modern elements and artistic styles. A team of artists and scribes working at a scriptorium in Wales under the direction of Donald Jackson, in consultation with a committee of scriptural scholars and theologians from Saint John's University and Abbey in Collegeville, MN, completed the sacred text and artwork in 2011 after eleven years of work.

So that more people might engage with this beautiful set of Scriptures, Saint John's decided to create Heritage Editions, fine art reproductions that would closely approximate the original. Each of the seven volumes is bound in red Italian calfskin. The paper, designed specifically for the project, has the feel of vellum. The printing and embossing produced text and art similar to the original. Because mechanical processes could not do certain things, the illuminations were treated by hand, which means that each Heritage Edition set is unique.

The Heritage Edition at Creighton University is housed in a viewing stand and cabinet handcrafted by the Saint John's Abbey Woodshop. The design is intended to reference the transatlantic collaboration that produced this magnificent Bible. The pieces are made primarily of red oak sustainably harvested from the Saint John's University and Abbey campus in Minnesota, while Welsh oak (from a tree that fell on Donald Jackson's farm, where the scriptorium was located) is used for the drawer fronts of the case and the dark hexagonal accents at the corners of the stand. In addition, the sweep of the legs and the hexagonal elements suggest features of the Abbey's Bauhaus church.

For more about this wonderful work of sacred art and Scripture, please visit The Saint John's Bible website.

We are blessed to collaborate with clergy across the Omaha metropolitan area to bring this special Bible to local places of worship. In this interdenominational project, faith leaders bring various perspectives as they feature specific illuminations in addresses to diverse audiences, all joined by the common inspiration of The Saint John's Bible. We are grateful to the communities for welcoming us warmly, and we are especially grateful to the clergy for participating and for graciously allowing us to share the recorded sermons. https://soundcloud.com/cuarchives

Many materials that are significant to the history of Creighton University are not in the University Archives. The list below provides links to other potential sources.

Some offices on campus have records and other information about individuals and events who have influenced (and may continue to influence) Creighton University.

The Office of the Registrar maintains the academic records of current and past students.

The Office of Alumni Relations has basic information (such as year of graduation) for Creighton graduates. The university website contains links to these and other offices.

Members of the Society of Jesus (more commonly known as Jesuits) have been a constant presence at Creighton since 1878, when five Jesuits opened the school. Creighton remains a Catholic and Jesuit institution.

The collections of the Jesuit Archives of the Central United States* include materials on Creighton University, the Creighton family, and many individual Jesuits who have been at Creighton since 1878.

* The Midwest Jesuit Archives was renamed the Jesuit Archives of the Central United States following the merger of the Missouri and New Orleans provinces of the Society of Jesus, which occurred on July 31, 2014. The institution serves as the provincial archives for the Wisconsin, Chicago, Detroit and the newly merged Jesuits of the USA Central and Southern Province.

The Creighton community - the individuals as well as the institution - have made many significant contributions to Omaha and to Nebraska over the years. Researchers may find information and artifacts related to Creighton at area historical organizations.

The Douglas County Historical Society, located at Historic Fort Omaha (now a campus of the Metropolitan Community College), has exhibits and collections pertaining to the history of Omaha and Douglas County.

The Nebraska State Historical Society is devoted to preserving and telling the history of Nebraska. With a presence at historical properties around the state, NSHS is headquartered in Lincoln, which is the main location for archival collections and museum exhibits.

The Durham Museum, housed in Omaha's historic Union Station, tells the history of Omaha and the western region of the U.S. with permanent exhibits and collections, including an online Photo Archive.