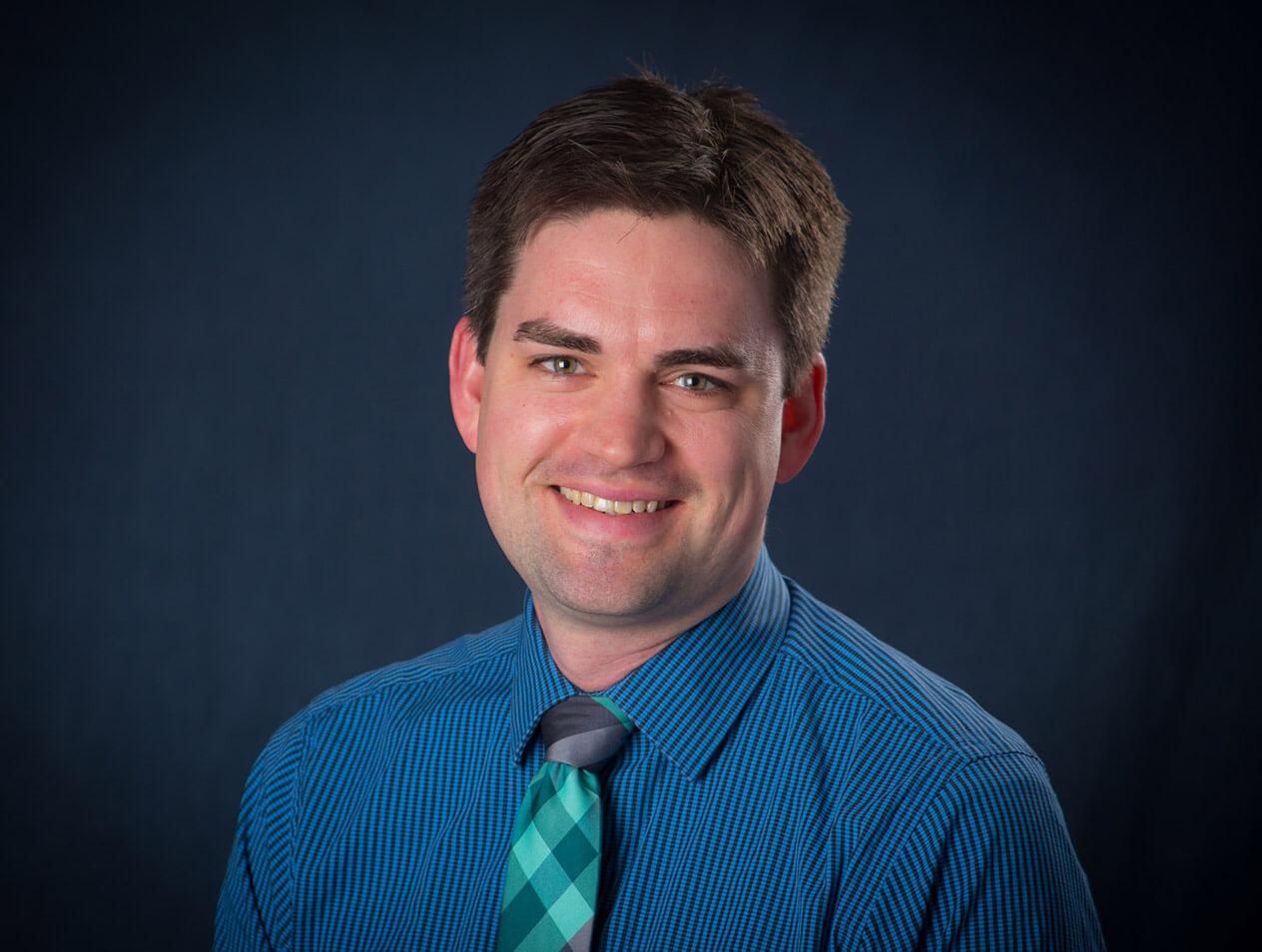 Andrew Baruth, PhD, an associate professor in the Department of Physics, always thought he’d be a science teacher. His gift for teaching is evident: He explains his complex work in nanomaterials with analogies to familiar items such as muffin tins or coffee tables. And his physics research – in a lab that has about a dozen students at any given time – appears almost indistinct from his teaching. It’s grounded in solving real problems and giving students challenging opportunities to tackle those problems. Agencies from the local (Omaha Public Power District) to the national (NASA) levels have taken notice and funded research projects for Baruth and his students.

The World of Nanomaterials Research

One of his current research projects involves polystyrene and polylactide, two mechanically similar organic polymers. The former is a traditional consumer plastic, but the latter is its biorenewable alternative made from cornstarch. Baruth describes these polymers as “spaghetti strands – squiggly little chains at the nano-level – and they hate each other. If we mix them together, they will try to separate – like oil and water. But if we force the individual strands of each type to stick together at the nanoscale through chemistry, so they can’t get away from each other, we can manipulate the separation process and naturally create specific nanoscale patterns.”

His current goal is to order the polymers so the polylactide creates cylinders within the polystyrene that stand upright and pack together, like a hexagon. Then, he can essentially compost the polylactide polymers, leaving rigid holes in the polystyrene where those cylindrical clumps were and create a nanostructure shaped, in his words, “muffin tin.” Now he can fill that muffin tin not with muffin mix but, in this case, with a magnetic material, creating very small magnetic pillars that would otherwise be very time intensive to create.

But why create them in the first place? “The world gets weird when you go nano. With most materials, the bulk properties that we are used to disappear in a nano state and the surface properties take over,” Baruth says. In other words, there are always interactions happening at the macro and micro levels, but what’s happening at the macro level overrides the other interactions due to its sheer size. However, when materials get small – say, 10 to 40 nanometers in any dimension – micro-level interactions become more important. This concept is key for teasing out and exploiting new magnetic properties.

“If I want to know how one magnet ‘talks’ to another magnet, I can tune the conversation by allowing the surface [micro] properties to become more important than the bulk [macro] properties,” Baruth says.

To examine the properties of nanomaterials, you need many tiny magnets, created through the help of the “muffin tin” nanostructure. One goal for examining these magnetic properties is to come up with findings that could prove useful in manufacturing, say, a computer hard drive.

Other applications for this nanotechnology include water filtration. If the openings left in the nanostructure from degraded polylactide were small enough, water could pass through but contaminants would not, including viruses. 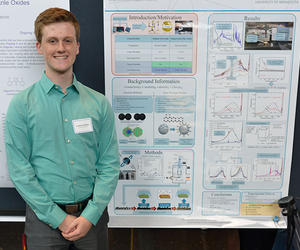 NASA could use technology like this to filter wastewater on long-term space flights, and they are funding work for a student in Baruth’s lab who is testing this idea. Gunnar Nelson (shown), a physics and energy technology major from near the Twin Cities, has earned a NASA research fellowship for the past two years.

Nelson indicated an interest in physics research as early as his campus tour, and, with his clear passion, he was offered a position almost immediately. “Undergraduate research gives me as a student the confidence to understand that I am a true scientist, and I can make a change in the field,” Nelson says. Because Creighton has fewer graduate students and programs than large Research I institutions, students like Nelson can get more involved early on.

He’s certainly making the most of the opportunity. With his peers and Baruth, Nelson has earned billing as first author on a forthcoming paper. Nelson and his peers designed a reaction chamber especially for their experiments so they could come up with results more quickly and reliably. Turns out the data proves that their instrument is not only unique, but it offers great control over critical variables in guiding the formation of their nanostructures.

Encouraging students to take a leadership role seems like the standard mode of operation for Baruth. “He values his undergraduate researchers immensely,” Nelson says. For several years, Baruth has worked with Omaha Public Power District (OPPD) on projects to build great future leaders in the energy sector. OPPD provides funding for students, guided by Baruth, to build infrastructure projects, conduct research and participate in internships so they can experience energy technology careers firsthand.

The opportunity to help students discover and reach their potential drives Baruth. “When I came and visited Creighton and saw the undergraduate research happening in the Physics Department – students weren’t just cleaning beakers – I was blown away,” Baruth says. “It’s work that makes them feel ready for grad school and helps them know what they’re going to do with their lives.”

His students agree that Baruth found a good fit when he decided to join that mission. “He would drop anything he is doing to help us work through finding our direction,” Nelson says. Then with a smile, he recalls a trip he and other students took with Baruth, to a meeting of the American Physical Society in Baltimore. “During the trip, we were just talking, and I asked Dr. Baruth, ‘Wouldn’t you want to win a Nobel prize?’ He replied, ‘No, but it would mean the world to me if one of my students won one. That’s how you know you have been successful.’”

For details on Baruth’s work, see his full expert profile.