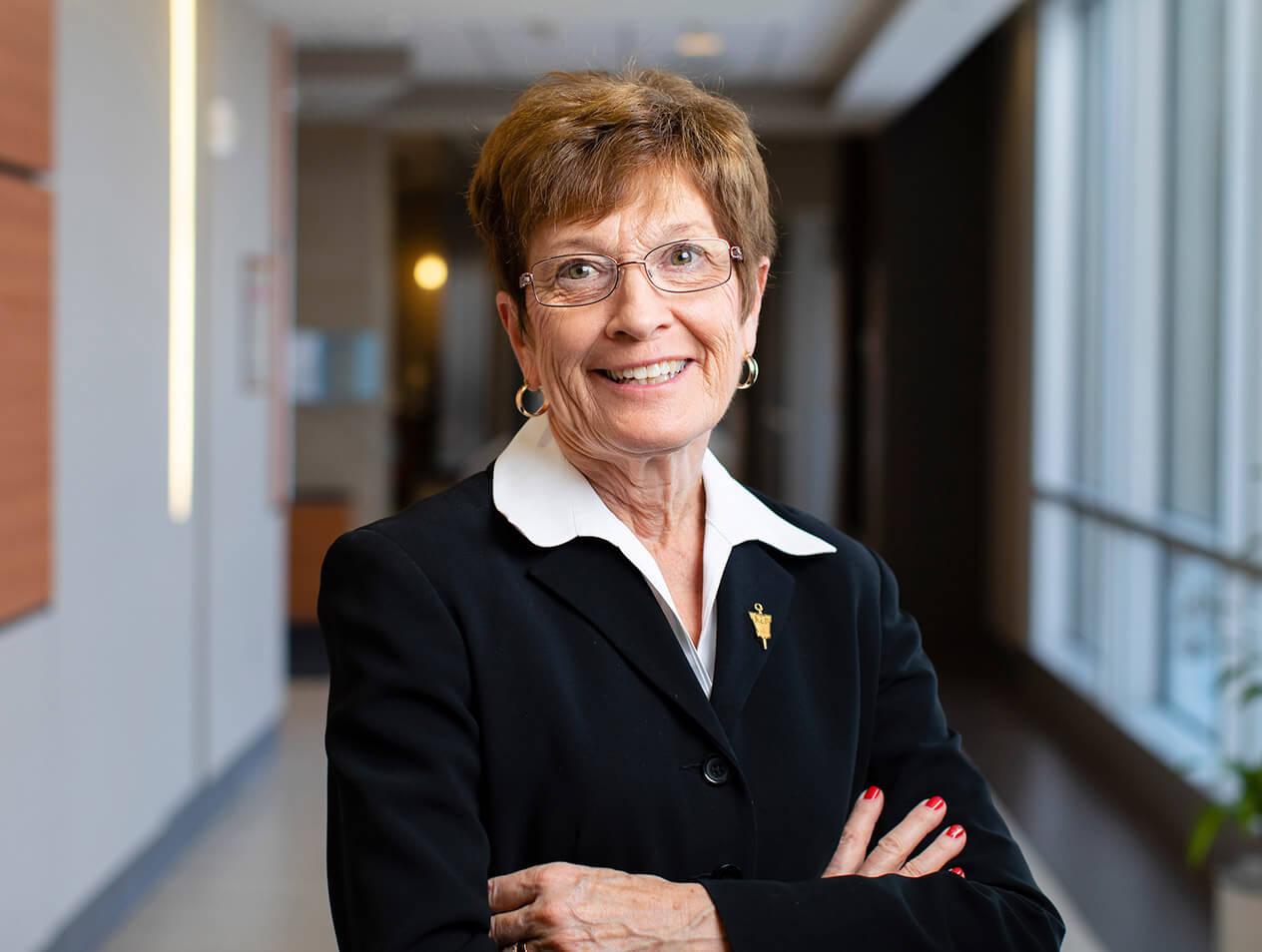 When Joan M. Lappe, PhD, RN, FAAN, starts talking about her research, she smiles broadly and uses an unexpected word: fun. With a passion for health promotion, Lappe – Criss/Beirne professor and associate dean of research in Creighton’s College of Nursing, and professor of medicine in the University’s Osteoporosis Research Center – has studied osteoporosis since before it was well understood. Along the way, she has contributed to advances in how we prevent and treat bone disease.

Growing up, Lappe recalls, conventional wisdom dictated that she had three career options – nurse, teacher or secretary. Her mother enjoyed her career as a nurse, so Lappe chose that path with no hesitation. In the mid-1980’s, she joined the Creighton faculty with a joint appointment, 50 percent in the College of Nursing and 50 percent in the School of Medicine as research project manager in the Osteoporosis Research Center. She focused on health promotion while pursuing her master’s degree and PhD, and, while finishing up the latter, she decided to do some of her own research in the Osteoporosis Research Center. 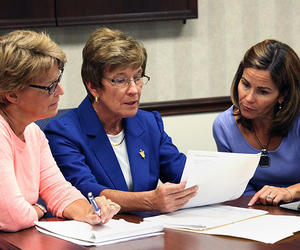 Watching the clinical research activity around her, she saw exactly where she wanted to focus: solving problems through research. “I saw the investigators were having a lot more fun than the project managers – doing the thinking, reading and coming up with a research questions.” This appealed to Lappe, a self-described learner. “Once I got my PhD,” she says, “I started applying for grants, and then soon I was having fun, too!”

Today, she hasn’t stopped having fun. Over the course of her career, Lappe has earned more $15 million in external funding, mostly from the National Institutes of Health. She has mentored countless other teacher-scholars and contributed some of the most significant findings in the history of Creighton’s clinical research. 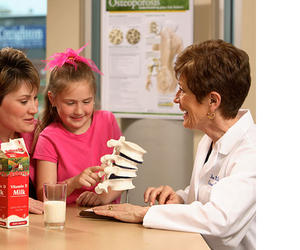 Lappe turned her focus to studying osteoporosis at the start of her career because, at that time, the disease inspired many questions but few answers. Describing how her passion for research grew, another surprising word comes up – creativity: “When you think about how you can solve a problem, it takes a lot of creativity to come up with the right question,” she says. Of course, conducting the research itself involves a careful protocol, not creative methods, she emphasizes. Her work is inspired by creativity, but carried out with discipline.

Lappe first made her mark as one of the first scientists to study bone health in children. At the time, she says, “the focus on osteoporosis was as an ‘old person’s disease.’”

That didn’t tell the whole tale, however.

“We were realizing that things like heart disease were impacted by what happened early in life,” Lappe says. She thought, “Why not extend this to bone health?”

Through a large-scale study with 1,400 children over six years, Lappe and a set of national collaborators established normal-bone-density reference levels for children. In that study, they also demonstrated that both physical activity and calcium are very important for the bones, even in childhood. As a health advocate, Lappe says, seeing these findings disseminated to the public felt very gratifying.

Another project that had a major impact came through a Department of Defense grant. The problem that Lappe tackled here was that young military recruits who entered basic training found themselves at high risk for stress fractures. For the military, this meant lost time and money, and for some recruits, fractures resulted in serious long-term disabilities.

Lappe’s study involved administering calcium and vitamin D supplements, or placebos, to female Navy recruits. The results showed that this simple supplementation measure decreased fractures by 20 percent. As a result, the Navy implemented supplementation to all female basic trainees.

One unexpected outcome of this study is memorable for Lappe.  One afternoon, she received a call from someone who was surprised when Lappe herself answered the phone. The caller asked if she’d have some time that afternoon, because the president’s physician would like to talk to her. Lappe supposed the caller meant the president of Creighton University, but as the conversation continued, that seemed less likely. Lappe finally asked which president they were talking about. The caller replied, “the President of the United States. His physician would like to talk to you.”

That afternoon, the physician called as promised and said he was impressed by the study (it had appeared in The New York Times and is still widely cited). He wanted to know what kind of supplements he should suggest to the president’s wife – Laura Bush. Lappe happily obliged with some advice.

Though publications and professional recognition are important to University faculty, Lappe’s main goal for her research is to influence policy, making sure that people have the information they need to make healthy choices.

Having studied vitamin D’s effects on bone health, Lappe became aware of studies on its apparent effects on cancer. In one of Lappe’s own studies, evaluating the effect of vitamin D and calcium on osteoporotic fractures, she observed that a group receiving vitamin D supplements had fewer cancer diagnoses than the control group. Because that was not what the study was designed to test, Lappe needed another opportunity to test the link between vitamin D and preventing cancer. She submitted a grant application to the National Institutes of Health and obtained funding to pursue that research question.

Recently, she and her team finished an extensive study of older women in rural Nebraska, in which half of the 2,300 participants received vitamin D and calcium supplements and the rest placebos. Four years later, the study found that cancer incidence was 30 percent lower in the supplemented group, although this finding fell just short of reaching statistical significance. However, discounting the data from the first year – during which there was probably not enough time for the supplements to have an impact – does show a statistically significant reduction in cancer. In addition, blood levels of vitamin D were significantly associated with cancer incidence; those with higher levels had about a 35 percent lower risk of cancer. This study contributes to the growing body of evidence that vitamin D decreases cancer risk. The Journal of the American Medical Association published the findings in March 2017.

To establish a relationship between vitamin D levels and cancer, researchers need to conduct more extensive studies with other populations, since Lappe’s study included only older women. However, Lappe says, we know enough about the physiology of vitamin D in relation to cancer development and progression that the anti-cancer effect makes sense.

Lappe will probably be among those scientists who continue to seek evidence of a connection. After three decades in human research at Creighton, she shows no signs of slowing down. Why has she chosen to dedicate so much of her life to this field and the institution?

“I love Creighton,” she says. “I love the opportunities I’ve had, I like the Christian environment. [In my work] it’s very important that we don’t take advantage of our research participants, especially older people and children with whom I work. I hear about problems colleagues at other institutions have with ethics, but we [at Creighton] are fortunate to work in an environment in which ethical decision making is a core value.”

Besides, she’s having too much fun to quit now.