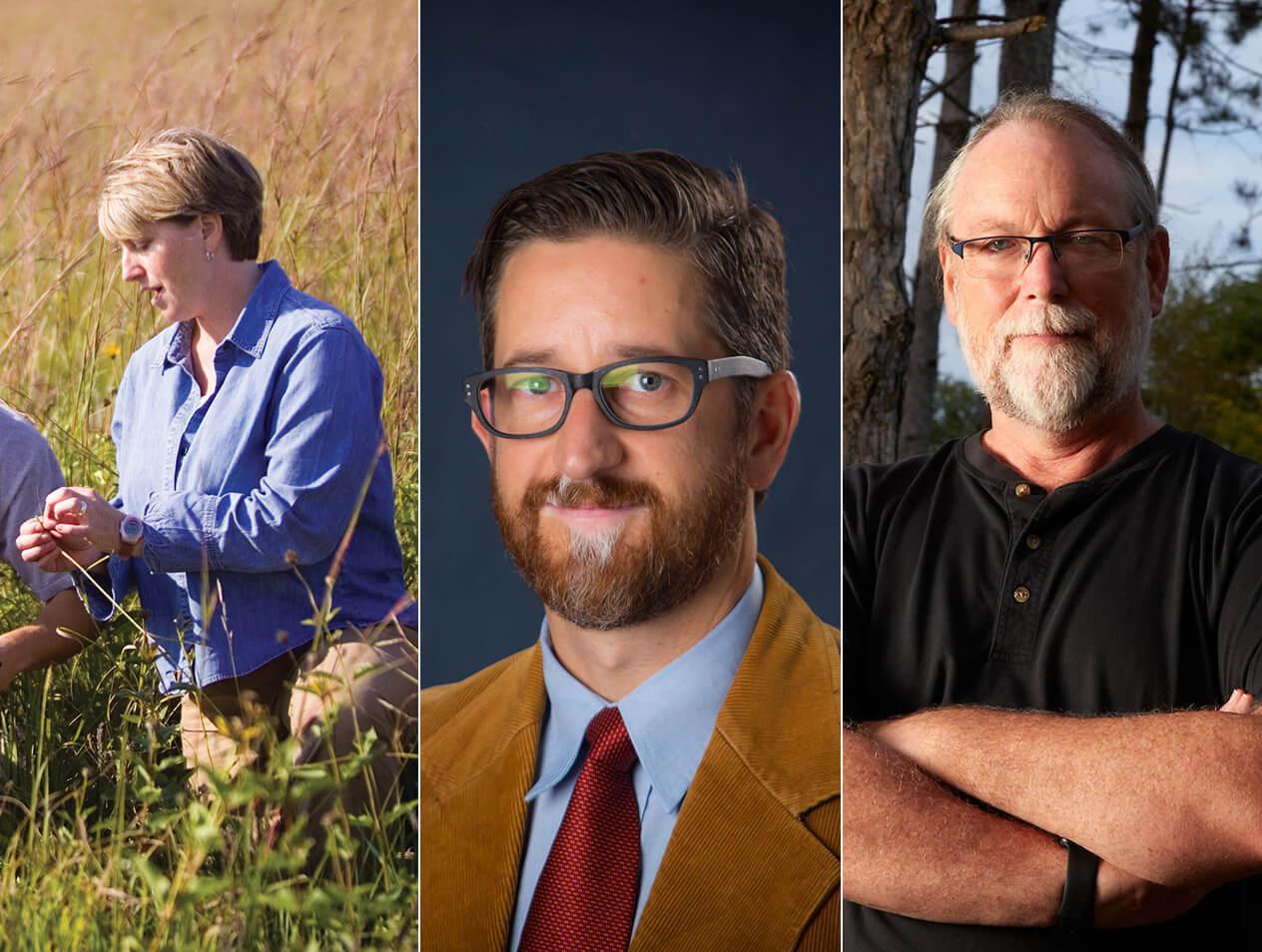 In her lab, Mary Ann Vinton, PhD, associate professor of biology, has three expired license plates propped against a white board. One plate number starts with “92,” indicating the county in Western Nebraska’s Sandhills region where she grew up. As the fourth-least populous county in Nebraska and one of the most sparsely populated counties in the United States, Grant County is home to about 614 residents, as of the 2010 census. Most county residents, including several members of Vinton’s family, are ranchers whose livelihoods are closely tied to the natural landscape. 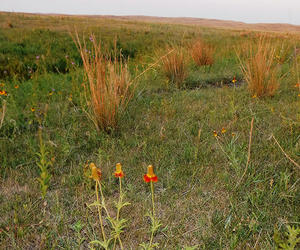 The storied Sandhills region, with its sand dunes and lowland valleys, stands apart as one of the most unique biophysical ecosystems in North America. Writers, artists and scientists alike have found themselves drawn to this 20,000-square-mile expanse. Vinton, who has spent much of her career studying soils and grassland ecology, is among those scientists.

But her own roots in the area add another dimension to her understanding of the place. For Sandhills residents, the natural, human, cultural and economic elements of the land are all inextricably linked. Vinton wanted to not only examine the ecology of these grasslands but also the relationship between the human and natural systems. While serving on a committee to address sustainability at Creighton, she connected with two colleagues in the College of Arts and Sciences who shared her curiosity.

An interdisciplinary collaboration between Vinton, Jay Leighter, PhD, associate professor of communication studies, and John O’Keefe, PhD, professor of theology, their research project brings together complementary perspectives on the significance of the Sandhills. The team received support from a Dr. George Haddix President’s Faculty Research Fund grant from Creighton University and a NASA Nebraska Space Grant.

Stability in the Sandhills

Each researcher seeks to answer the following question: What is the long-term stability of the Sandhills in the face of increased stress on the natural and social systems? These stressors include natural ones such as drought, compounded by challenges to the social systems, brought on by steady population decline and dependency on the cattle-ranching industry. For example, residents have limited access to services like health care and education, as those resources concentrate in urban areas.

I am interested in how humans maintain a healthy existence in the face of environmental change. What are some adaptations that we can make in the face of change to be resilient?
— Mary Ann Vinton, PhD

Though the resilience of each system influences the others, the mechanisms are different. In biology, Vinton explains, adaptation can eventually lead to species change and evolution. In social systems, on the other hand, adaptation may involve people rethinking and reorganizing institutions and networks. 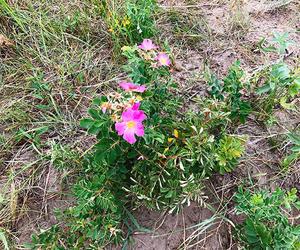 Vinton will examine biological resources by using remote sensing technology and other tools. She seeks to document how drought and other extreme climate variations affect the vegetation. Those changes could have far-reaching effects. These grasses sustain the cattle roaming the hills, providing a livelihood for ranching families and food for other parts of the country.

“I am interested in how humans maintain a healthy existence in the face of environmental change,” Vinton says. “What are some adaptations that we can make in the face of change to be resilient?” There is no simple – or single – answer to this question. That’s where Leighter and O’Keefe come in. 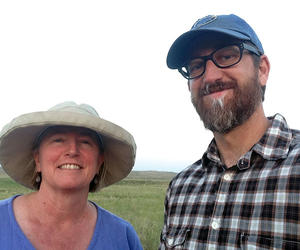 Leighter, an expert in cultural communication and sustainability, is employing interviews and observation to discover the cultural meaning of the place-based term “The Sandhills.” He aims to see how ranching practices may work with conservation measures such as grazing, watershed protection and renewable energy production. Over the last few years, Leighter designed and facilitated conversations about sustainability across Nebraska through the Joslyn Institute for Sustainable Communities. Through this work, he learned about some of the most important issues for the state’s rural communities.

Working with Vinton provides an inroad for Leighter to gain trust from the local residents. The research team even hosted a barbecue for the Vinton family. Even so, he listens to them with a keen awareness that he is an outsider, knowing that this status and the accompanying assumptions of each participant (himself included) shape every utterance. And that’s okay – it makes each interaction a rich source of cultural information for Leighter to capture.

We need to see other worldviews for any hope of addressing those challenges successfully.
— Jay Leighter, PhD

Many groups outside of the area recognize the value of the Sandhills and want to aid in conservation efforts, but first they must learn what the place means to the people who live there. “With problems like these, we need to see other worldviews for any hope of addressing those challenges successfully,” Leighter explains.

His documentation and analysis could aid this understanding. “By articulating culture–that is, providing a written description of symbols, meanings, beliefs and rules of culture–you provide resources for dialogue,” he says. He hopes that his research can help facilitate informed conversations about environmental concerns within and between local governments, businesses and other groups.

Of Sand and Sky 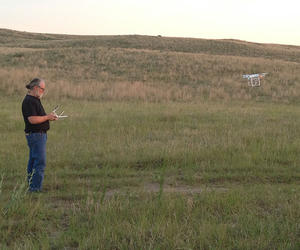 Though it may seem to belie the complex challenges at work here, the visual appeal of the landscape is inescapable. O’Keefe, a documentary filmmaker as well as a theologian, is exploring its aesthetic and spiritual aspects. He seeks to capture the unique relationship between the people and land, interwoven with highlights from Leighter and Vinton’s work, in a documentary. O’Keefe is also capturing drone footage–little of which exists of the Sandhills–for not only the documentary, but for Vinton’s analyses­ as well.

O’Keefe grew up far from the Great Plains, on the densely populated East Coast. Nonetheless, he was drawn to the Sandhills because its rolling hills remind him of the sea. A longtime faculty member at Creighton, he also envisioned this interdisciplinary project as a way to engage meaningfully with the state of Nebraska.

In other recent projects, he has been considering the spiritual dimensions of urban and rural life. For instance, in the city, does light pollution blocking out the stars in the night sky affect humanity’s sense of our place in the cosmos? The night sky in the Sandhills, on the other hand, is so black that it attracts the annual Nebraska Star Party, a popular mecca for amateur astronomers, tourists and locals alike.

I’m paying attention to different details than I would if I wasn’t walking around with a biologist.
— John O’Keefe, PhD
Image 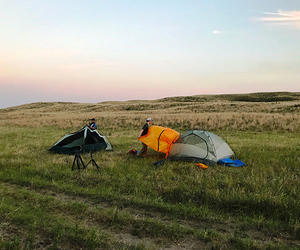 In this environment, the sky is such an imposing presence that O’Keefe soon came to think of it as a character in his documentary. Though beautiful sights and unique insights abound, developing the storyline to tie them all together poses a unique challenge. There is no single event or conflict around which to center the plot. O’Keefe has to look closely for the story each character tells.

His colleagues also affect his creative process in subtle ways. “I’m paying attention to different details than I would if I wasn’t walking around with a biologist,” he says of Vinton. For his part, O’Keefe says, Leighter helps him “de-romanticize” the Sandhills and observe people for who they are.

Though O’Keefe is doing much of the filmmaking himself, he also works with students, and so will Leighter and Vinton. The NASA-funded portion of the project includes a strong undergraduate research component. Students will conduct field work, including collecting plant samples, recording interviews and shooting documentary footage.

Vinton believes the project exemplifies what is special about Creighton – including its Environmental Science Program, which she directs. The program comprises a major with multiple tracks and minors in environmental science and policy. Like this research project, the program integrates multiple approaches to tackling environmental issues in all their complexity.

“I’m happy to be at a liberal arts [university], where I can have this collaboration. At a larger school, I would not have spent as much time with folks in different fields,” she muses. O’Keefe echoes this sentiment: “Interdisciplinarity isn’t manufactured – it’s about relationships.”

At Creighton, Vinton says, people from different disciplines and backgrounds can put their heads together and find common ground by bringing a Jesuit worldview to their scholarship. “Jesuits believe in being engaged with the world’s current problems,” she says.

Thinking through those problems means working together–to cite another Ignatian ideal–as men and women for and with others.

From the Vinton Vault

Mary Ann Vinton, PhD, and her colleagues are basing their field work on some of the same land where her family began ranching in the 1880’s. Vinton and these photos tell part of the family’s history. 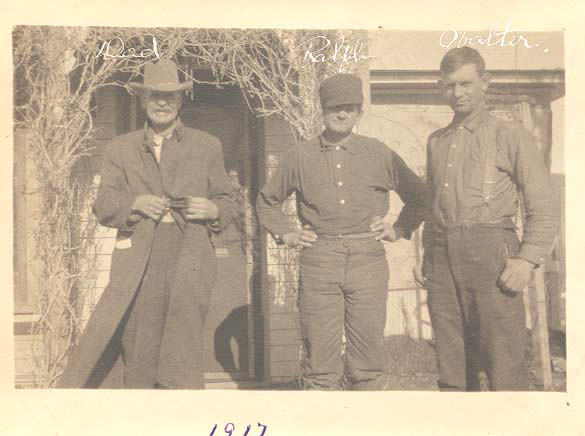 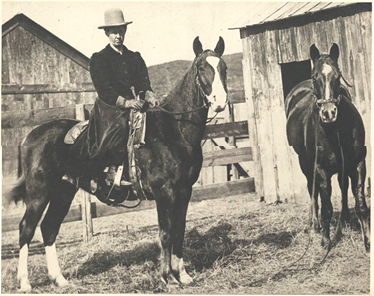 “This is Nettie Swiggart, Ralph Swiggart’s wife and my great-grandmother. She loved horses, birds and flowers and apparently did not enjoy staying indoors or typical “women’s work”; Ralph and Nettie had one daughter, Helen, who would end up marrying John Hopkin Vinton (who grew up in the next valley over). 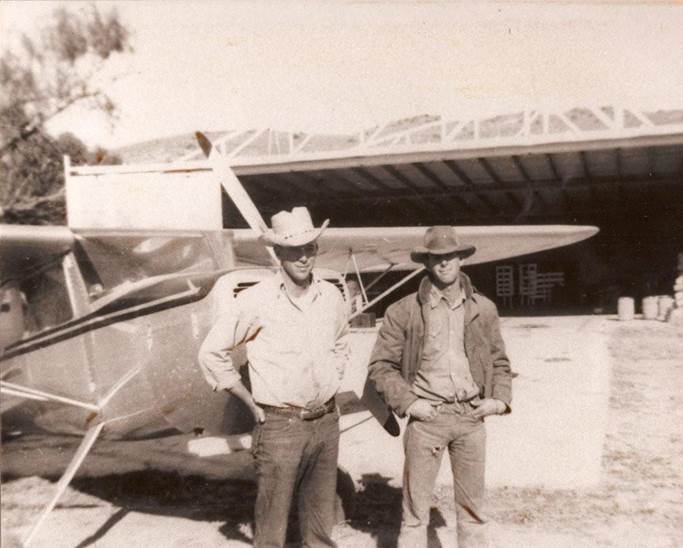 Left to Right: Ralph and John Vinton, brothers “They were both pilots and used planes to check on far-flung pastures and windmills. Ralph is my father and the son of Helen Swiggart and John Hopkin Vinton.” 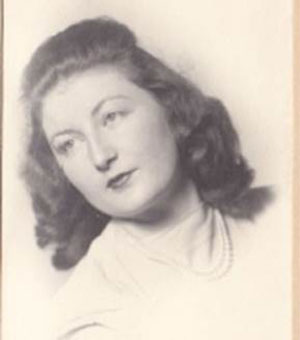 “This is my mother, Maryann Manning Vinton; her parents were Irish immigrants and dryland farmers in the Alliance area, and she became a registered nurse. She and Dad [Ralph] courted through the winter of 1949, which was a particularly snow and blizzard-filled winter; Dad would put skis on the airplane so he could fly into town to see her. She was left a widow in 1968 when dad died. She had 11 children (the last two, twins, born 2 months after dad died) and she ran the ranch for the next 47 years and died in 2014. In her will, she left me some land on the Dismal River, which is where I’ve centered my field work.”

Photo Credits and Descriptions from Top

All historical photos and descriptions courtesy of Mary Ann Vinton